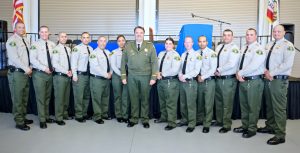 The Santa Barbara County Sheriff’s Office is pleased to announce the graduation of 12 Sheriff’s Office custody deputies from the Allan Hancock CORE Custody Deputy Academy.   The graduates received their certificates of completion today, October 19, 2017, at a formal ceremony held at the Allan Hancock College Public Safety Training Complex in Lompoc.  The majority of the class was funded by the Northern Branch Jail Project and will be assigned to the new facility when it opens in the Spring of 2019.

The graduates completed a comprehensive California Standards and Training for Corrections, which included 220 hours of instruction. Some of the instruction included emergency planning in a custody facility, report writing, ethics, investigation procedures, classification of inmates, contraband detection, arrest and control and physical training.  The graduates range in age from 22 to 45 years of age and come to the Sheriff’s Office with a variety of backgrounds and life experience.

The Academy is designed to prepare students mentally, morally, emotionally and physically to work as Correctional Officers.  In his keynote address, Santa Barbara County Sheriff Bill Brown spoke directly to the cadets and reminded them of responsibility that comes with their chosen career.  He said, “Never forget that you have the opportunity to be an integral part in changing for-the-better, the thinking, attitude behavior and future of inmates who are committed to your care.  You should always exhibit the type of respectful demeanor we want and expect from them.  By doing this, you will help reduce future crime and protect the public we serve in a meaningful way.”

We are excited to welcome this great group of new custody deputies to our Sheriff’s Office family.

The Sheriff’s Office is currently accepting applications for Custody Deputy.  This is a tremendous opportunity for individuals who want to make a positive difference and serve their community while pursuing a career in Public Safety.  To apply, go to our website at www.sbsheriff.org.