After five weeks of interactive classes, 14 people graduated today, March 2, 2019, from the Sheriff’s Isla Vista Citizen’s Academy.  While the Sheriff’s Office routinely puts on Citizen’s Academies, this is the first one that was designed specifically for those affiliated with Isla Vista.  The participants ranged in age from 17 to 83 with different backgrounds and experiences.  The group included students, a banker, a homeless advocate and a Deputy District Attorney, just to name a few. 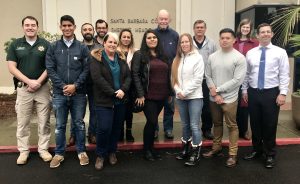 The Citizen’s Academy is designed to give the public an inside look at just some of what law enforcement does on a daily basis to keep its citizens safe. The free course is also geared for community members interested in a career in law enforcement/public safety and is a great recruitment tool for the Sheriff’s’ Office.

During the course of the program, there were many interactive and hands on experiences for the participants.  They learned how to respond during an active shooter or crisis situation and experienced the emergency driving skills course. They also had the opportunity to participate in real scenarios and forensics projects. 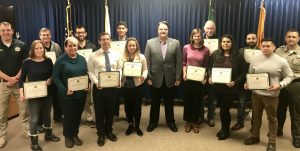 Today the participants finished their last class which included a tour of the jail, a bomb squad demonstration and a K-9 demonstration. Then, they received their certificates of completion at a graduation ceremony and celebratory BBQ.  The certificates were presented by Sheriff Bill Brown and Isla Vista Community Resource Deputy Justin Schroeder who organized the Citizen’s Academy.

Lt Juan Camarena of the Isla Vista Foot Patrol said this Academy succeeded in its mission.  He said, “The idea behind the Isla Vista Citizen’s Academy is to enhance the partnership between the Isla Vista community and the Sheriff’s Office.  This will improve communications and lead to better public service.  The Academy gave the participants a working knowledge of the Sheriff’s Office.  It helped the participants understand how and why deputies and officers make certain decisions while performing their duty.”

Organizers plan to hold more Citizens’ Academies in different areas of Santa Barbara County in the near future to allow more people to participate.  To find out when the next Citizen’s Academy is, sign up for Nixle alerts on our website at www.sbsheriff.org  or follow us on Facebook, Twitter and Instagram.