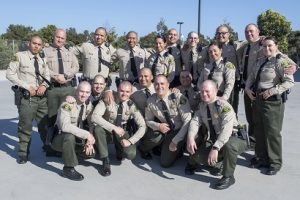 The graduates completed a comprehensive California Standards and Training for Corrections with 243 hours of instruction. Some of the instruction included emergency planning in a custody facility, report writing, ethics, investigation procedures, classification of inmates, contraband detection, arrest and control, physical training and Direct Supervision training. 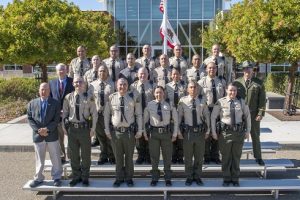 In Sheriff Brown’s keynote speech, he began by recounting Custody Deputy Knapp’s heroic actions during the Borderline shooting last year. Sheriff Brown shared how Knapp “…witnessed the horror of the mass shooting. He watched as the perpetrator walked into the bar, and shot the girl working the front desk, as well as the person behind her. During the chaos he attempted to save and guide as many as he could out of the bar, pushing people to cover behind a pool table and waiting for an opportunity to get them out. When the perpetrator was reloading, Custody Deputy Knapp guided others to the smoking patio of the bar, and over the fence into the parking lot. That’s when he spotted a California Highway Patrol Officer making a traffic stop and informed the officer of the shooting. Custody Deputy Knapp also helped transport the injured individuals from the scene to an area of safety. He would soon find out that one of his friends, as well as several people he knew, had lost their lives that night. Custody Deputy Cole Knapp is to be commended for his bravery, quick response, and heroic actions. His actions exemplify the Santa Barbara County Sheriff’s Office’s Guiding Principles of Caring, Courage and Service.” Sheriff Brown ended his speech by welcoming the graduates to the respected ranks of law enforcement and encouraged them to carry on the tradition of excellence.

If you are interested in career in law enforcement or know someone who is, please visit our website at SBSheriff.org to apply.