On October 24, 2017, Santa Barbara County Sheriff’s deputies attempted to conduct an investigation of a suspicious vehicle parked in the Tanglewood neighborhood in Santa Maria. The driver fled the scene and led deputies on a pursuit. During the pursuit, the vehicle drove recklessly at a high rate of speed crossing into the opposite lane of traffic multiple times. The pursuit was terminated for safety reasons as it entered into the City of Santa Maria.

Patrol deputies conducted a follow up investigation and identified the driver of the vehicle as being 30-year-old Carlos Encinas of Santa Maria. Encinas was found to be wanted on multiple felony warrants including a $1,000,000 warrant for kidnapping, assault with a deadly weapon, criminal threats and stalking.  The warrants stemmed from a 2015 domestic violence case handled by the Santa Maria Police Department.

On Halloween, October 31, 2017, Encinas was found to be staying at a residence in 1900 block of Sandalwood Drive in Tanglewood. When deputies served an arrest warrant at the residence, Encinas attempted to flee and assaulted a Sheriff’s deputy before he was taken into custody. Encinas was transported to the Santa Barbara County Jail where he was booked on his outstanding warrants, evading a peace officer and resisting a peace officer with force. 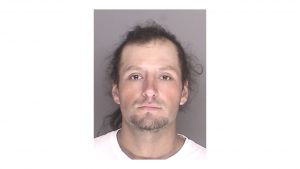