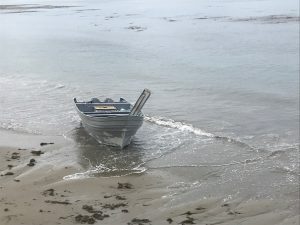 Santa Barbara, Calif. – An abandoned panga boat was discovered on Tajiguas Beach at around 8:55 a.m. this morning, Friday, 7/17. Personnel from the Sheriff’s Office and State Parks responded to the scene. The approximately 35-foot drug smuggling boat was equipped with two motors and there were several fuel cannisters found discarded in the kelp nearby. Investigators searched the area and were not able to locate any suspects or drugs.

Homeland Security Investigations took possession of the boat and will conduct further investigation.