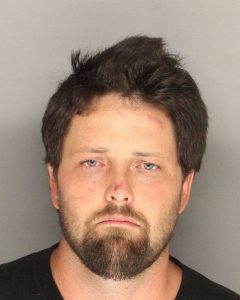 The assault victim located on July 20, 2019 at approximately 1:20 a.m., in the 4900 block of 9th street in Carpinteria, has succumbed to his injuries. 32-year-old Eric Romero of Carpinteria was transported to the hospital in critical condition as the result of injuries he sustained during an assault. On July 23, 2019 at approximately 9:00 p.m., Romero was taken off life support and pronounced dead at the hospital.

Following the discovery of the victim, the Sheriff’s Office launched an investigation to determine the circumstances surrounding the incident. During the course of the investigation, 29-year-old Scott Robert Fleming of Carpinteria was identified as the alleged suspect in the assault against Romero, and a warrant was secured for his arrest.

On July 22, 2019, detectives from the Criminal Investigations and Special Operations Bureaus, with the assistance of the Ventura Police Department, located and arrested Fleming without incident. He was subsequently booked into the Santa Barbara County Jail on charges of 243(d) PC – Battery causing serious bodily injury, and 245(a)(4) PC – Assault with great bodily injury.  He is being held on $100,000 bail. Because Romero has now succumbed to his wounds, Sheriff’s detectives plan to request the District Attorney’s Office consider charging Fleming with a violation of 192(a) PC – Voluntary Manslaughter.

While a suspect in this case has been arrested, the investigation into the incident is still ongoing. The Sheriff’s Office asks for anyone with information about this incident to call the non-emergency dispatch line at 805-683-2724, or to make an anonymous tip through the Sheriff’s Office website: https://www.sbsheriff.org/home/anonymous-tip/