The Santa Barbara County Sheriff’s Office is reminding residents to be alert and aware of their surroundings while using ATM machines following an incident in Orcutt.   At approximately 2:00 p.m. on November 6, 2017, a suspect armed with a knife approached a citizen who was using an ATM machine.  Fortunately, the citizen fled and was not hurt and Sheriff’s deputies, who had been tracking the suspect prior to the citizen encounter at the ATM, were able to quickly apprehend him.

The incident actually began when Sheriff’s deputies received a report of a suspicious subject in the area of the 5800 block of Ken Avenue. The suspect was repeatedly looking back over his shoulder as if someone was following him, and possibly “under the influence” of a controlled substance. An additional report was soon received that a subject, matching the same description, had knocked on the door of a residence on Ken Avenue while holding a knife in his hand. Saint Louis de Montfort School located nearby was placed on lockdown as a precautionary measure. 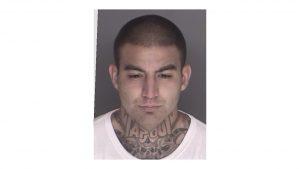 Deputies conducted a search of the area and due to citizen tips located the subject who was observed approaching a citizen at a Wells Fargo ATM machine. When the citizen turned to face the subject, he pulled a previously concealed, 12-inch long kitchen knife from the pocket of his shorts.  The resident immediately fled on foot leaving his ATM card in the machine.  Deputies immediately confronted the suspect at gunpoint and observed him throw the knife into a nearby garbage can. 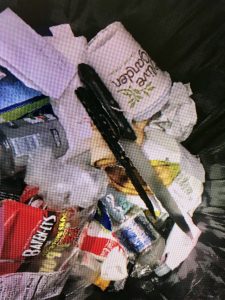 The suspect, who was identified as being 23-year-old Michael Fernandez of Orcutt, was taken into custody and found to be in possession of methamphetamine. When deputies searched the garbage can, they located two knives, one being a 12-inch kitchen knife with an eight-inch long blade and the other knife being an open and locked butterfly knife with a four-inch long blade.  He was booked at the Santa Barbara County Jail on several felony and misdemeanor charges.  He is being held on $40,000 bail.

The incident serves as reminder of the importance of reporting suspicious activity in and around your neighborhoods and businesses.  When using ATM machines, there are several steps that can be taken to improve safety:

The Sheriff’s Office wants to commend the residents in this case who reported suspicious activity and the resident at the ATM who was aware of the suspect approaching and was able to flee.