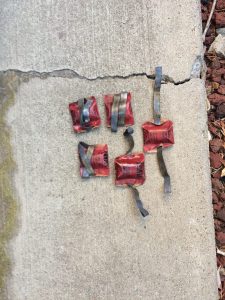 At approximately 4:00 p.m., on July 28, 2018, a resident in the 300 block of Old Mill Road was cleaning out old items from a storage shed and found a group labeled explosive. Deputies responded and requested the assistance from the Santa Barbara County Sheriff’s Bomb Squad. Members of the Bomb Squad responded with specialized equipment and determined the items to be railroad torpedo signaling devices. The explosive devices are commercially manufactured but are dangerous to handle and can cause injury. The torpedo signaling devices were secured for safe disposal.

A railroad or track torpedo signaling device is a small dynamite charge that is usually wrapped in red paper with metal straps to hold it firmly in place on a railroad rail. When a locomotive’s wheel comes into contact with the torpedo, the weight of the engine sets off the charge creating a loud bang to signal the conductor to stop the train. Today, with the use of two-way radios, railroads do not use track torpedoes as much as they did in the past.