A Buellton resident is in custody at the Santa Barbara County Jail following an investigation by the Sheriff’s Criminal Investigations Division.  On March 18, 2019, the Sheriff’s Office was contacted by Santa Ynez Valley High School (SYVHS) regarding alleged inappropriate sexual contact between a student and 52-year-old Greg Scott Ray, a yearbook consultant and salesman who covers Central California.  The report stemmed from a conversation a teacher overheard and reported to School Administrators.  SYVHS promptly contacted the Sheriff Office who subsequently initiated an investigation. 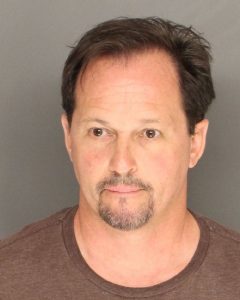 The investigation revealed that Ray was using a social media app as a way to meet and have sexual contact with young males.  Through the course of the investigation, Sheriff’s detectives confirmed he had inappropriate sexual contact with three known male victims, ages 13 to 17 in the Santa Ynez Valley.  At this time, it appears the introductions occurred through the app and Ray reached out to the victims multiple times throughout the course of several years. While the case is still under investigation, there is no information at this time to indicate the sexual contacts occurred on campus.

This morning, April 9, 2019, Sheriff’s detectives served a search warrant at Ray’s residence in Buellton and he was subsequently arrested.  Ray was booked at the Jail on various sex related charges involving minors.  His bail is set one million dollars.

Detectives have determined that Ray was using the social media app for many years and there is a concern that there may be more victims.  If you have been victimized, know of any potential victims or have information related to the investigation, you are asked to please call the Sheriff’s Criminal Investigations Division at 805-681-4150.  To leave an anonymous tip, please call 805-681-4171 or go to our website at  https://www.sbsheriff.org/home/anonymous-tip/.

Due to the active investigation involving minors, we are not able to release additional info at this time.