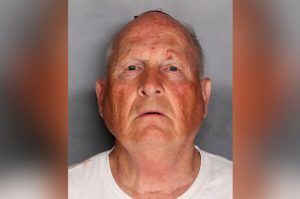 Almost forty years after the suspect known as the Original Night Stalker/East Area Rapist is believed to have committed the first of three horrific crimes in Santa Barbara County near Goleta, the Sheriff’s Office is pleased learn that the Sacramento County Sheriff’s Office has made an arrest in the case.  72-year-old Joseph James DeAngelo of Citrus Heights, California was arrested after investigators matched discarded DNA evidence with genetic evidence from the crimes. The Original Night Stalker is tied to 12 murders, more than fifty rapes and potentially hundreds of burglaries that occurred across ten counties in California from the late seventies to mid-eighties.

DeAngelo is linked through DNA evidence to a double homicide near Goleta in 1981 and is believed responsible for another double homicide two years prior in 1979 and an attempted double homicide also in 1979.  The crimes not only devastated the families and friends of those killed, but created fear and panic in Santa Barbara County and in communities, he terrorized across California.

Just after 5:00 p.m. last night, April 24, 2018, the Sheriff’s Cold Case Unit was notified that the Sacramento County Sheriff’s Office had made an arrest in the case.  Sheriff’s detectives, including Cold Case investigator Gary Kitzmann, immediately traveled to Sacramento to further the investigation of the cases from Santa Barbara County linked to the Original Night Stalker.

The Sheriff’s Office has never stopped working to determine who was responsible for these horrific crimes in our community, and for terror instilled in the hearts of so many community members over the years.  Detective Gary Kitzmann, who has personally investigated hundreds of tips and investigated thousands of persons of interests reacted to news of the arrest.  He said, “I am incredibly relieved as we all are here at the Sheriff’s Office that the suspect has been identified, arrested and that he will be brought to justice.”

Santa Barbara County Sheriff Bill Brown said, “We know this is an emotional day for all of those who were impacted by this suspect’s reign of terror, but it is a great day in the annals of criminal investigation. This case is a great example as to how fortunate we are to have DNA technology advancements, which can help solve crimes even as long as forty years later.  Justice may have been delayed in this case, but it will ultimately be served.”

The Original Night Stalker’s Crime spree in Santa Barbara County is believed to have started in October of 1979.   A couple was attacked while they slept in their home near Goleta.  Fortunately, in this case, both of the victims managed to escape, but the suspect fled the scene on a stolen bicycle and evaded capture.

Two months later, on December 30, 1979, 44-year-old Dr. Robert Offerman, an orthopedic surgeon and 35-year-old Dr. Alexandria Manning, a psychologist, were both brutally murdered in their condo near Goleta.

Two years later, on July 27, 1981, 27-year-old Greg Sanchez and 35-year-old Cheri Domingo were also found brutally murdered in a home near Goleta that Cheri was housesitting.  In 2011, thanks to the tenacious detective work by Gary Kitzmann and Jeff Klapakis, DNA evidence linked this double homicide to other crimes committed by the East Area Rapist/Original Night Stalker.

Sheriff Brown said this case exemplifies how a case is truly never closed until justice is served.  He credited the determination of all of the investigators who never stopped following leads and who kept investigating this case. He also thanked the public, who never stopped providing leads to help solve this case and the media for keeping the case in the public eye.

The Sheriff’s Office recently participated in a five episode special called “Unmasking a Killer” which aired on CNN and, another multi-part special on ID Discovery entitled “Golden State Killer, It’s Not Over”.  The Sheriff’s Office participated in these productions to help raise awareness about this unsolved case and to help with the continued search for the suspect.

If you have any information about the suspect, Joseph James DeAngelo and his travels to Goleta and Santa Barbara, you are asked to please call the Sheriff’s Criminal Investigations Division at 805-681-4150. To leave an anonymous tip, please call 805-681-4171 or go to https://www.sbsheriff.org/home/anonymous-tip/.