The Santa Barbara County Sheriff’s Office continues its investigation into a series of incidents involving windows being shot out of vehicles by what appears to be an air soft or BB gun. More than a dozen vehicles were vandalized overnight on May 31, 2018 and on June 7, 2018 another 12 vehicles were targeted in the Santa Maria and Orcutt areas.  Of the 12 new incidents, nine occurred in the City of Santa Maria and three in the Orcutt area. The Sheriff’s Office is working closely with SMPD to identify the parties responsible. 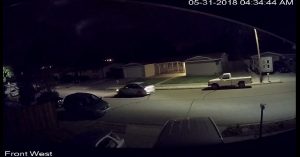 On May 31, 2018, a suspect vehicle was caught on multiple surveillance cameras driving through several neighborhoods in the area of Rice Ranch Road in the community of Orcutt. The suspect(s) shot out windows of cars parked along the roadway or parked in driveways.  The most recent crime spree on June 7, 2018 involved vehicles located in the 400 block of Fair Oaks and in the 1200 and 1300 blocks of Mira Flores near S. Bradley and Rice Ranch Road.  The crimes that were reported to SMPD occurred in the area of S. Elizabeth and Boone, which is east of the Santa Maria Courthouse.

While there is no evidence at this time directly linking the two crime sprees together, there is reason to believe they may be related.  The Sheriff’s Office is re-releasing photos and video of the suspect vehicle that was captured in the May 31, 2018 car vandalism spree.  The vehicle was possibly a silver, early to mid-2000’s Toyota Corolla model S four-door sedan with a factory spoiler on the rear trunk lid, a sunroof, and factory six-spoke wheels.

The Sheriff’s Office is requesting anyone with information to please call the non-emergency dispatch line at 805-683-2724 or to leave an anonymous tip, please call 805-681-4171 or go the how to file an anonymous report here on our website.