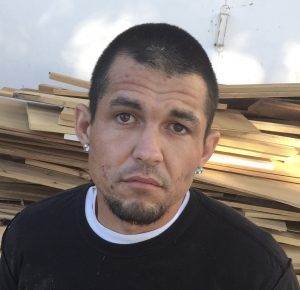 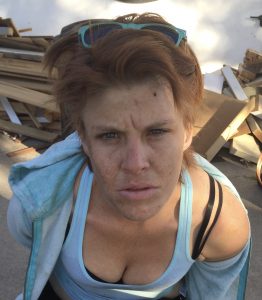 Just before 2:00 p.m. on December 6, 2017, the Santa Barbara County Public Safety Dispatch Center received a 9-1-1 call from a resident who reported that suspects entered his garage in the 500 block of Dale Way in Orcutt and stole a chainsaw.  The victim had been working in his garage, on his chainsaw, with his garage door opened. He stepped inside his house and when he returned to his garage a few minutes later, he discovered his chainsaw missing.  The victim walked out of his garage and contacted a neighbor who told him he saw subjects walking in the neighborhood, one of whom was carrying a chainsaw.

Sheriff’s Deputies were dispatched to the area and began searching the neighborhood.  The suspects were described as a male dressed in black and a female with red hair.  After about 30 minutes of searching the area, a deputy observed two subjects walking near David Road and Comanche Avenue, one of which had a chainsaw bar sticking out of his backpack.  The suspects attempted to hide on the property of a nearby residence on Comanche Avenue.  Deputies quickly located the subjects, along with the stolen chainsaw, and took them into custody.

The suspects were identified as 30-year-old Daniel Brown and 28-year-old Deanna Trott, both transients in the Santa Maria area.  They were arrested for burglary, possession of stolen property and conspiracy to commit a crime.  Brown is on Post Release Community Supervision (PRCS) for a theft related offense, domestic violence, as well as other miscellaneous offenses.  Additionally, Trott had a warrant for her arrest for a probation violation.  The suspects were later booked into the Lompoc Police Department Jail.