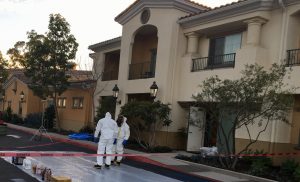 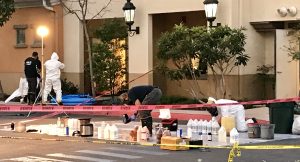 Just after 9:00 a.m. this morning, January 29, 2019, employees at a hotel in the 400 block of Storke Road in Goleta discovered suspicious chemicals in the boiler room and called 911.  Sheriff’s deputies responded and discovered what appeared to be a clandestine drug lab.  Santa Barbara County Firefighters responded to assist in case there was a fire hazard associated with the drug lab.  Upon further investigation, it was determined there was no immediate threat to the surrounding community and evacuations were not necessary. As a precautionary measure, hotel guests in the immediate area were located to a different area of the building.

Sheriff’s narcotics detectives responded and conducted further investigation.  During the course of the investigation, they found evidence of a dimethyltryptamine (DMT) lab and requested the Los Angeles Interagency Metropolitan Police Apprehension Crime Task Force (L.A. IMPACT) respond to the scene and safely dismantle the lab.  The team, made up primarily made up of LAPD Officers, spent the day and evening processing the scene.

Additional investigation revealed the suspect was a maintenance employee of the hotel who was already in custody at the Santa Barbara County Jail.  On January 26, 2019, Sheriff’s deputies observed 37-year-old Aaron Gorzeman of Oxnard, who had outstanding warrants for his arrest, in the parking lot of the hotel.  When they contacted him, they discovered he was in possession of methamphetamine and drug paraphernalia.

After the lab was discovered, Sheriff’s detectives obtained search warrants for the hotel and the suspect’s vehicle.  Upon searching his vehicle, detectives discovered additional evidence of drug manufacturing. A search warrant was obtained and served at his residence tonight in Oxnard with the assistance of the Ventura County Combined Agency Narcotic Task Force (VCAT).

Gorzeman was re-booked for additional charges of drug manufacturing.  He is being held on $100,000 bail.

DMT is a powerful hallucinogenic drug.  The manufacturing process requires the extraction of chemicals from root bark through the use of highly toxic and flammable chemicals in an extraction vessel over an open flame.  If you suspect this type of illegal activity is occurring, call law enforcement right away.

Also, it is important to recognize that DMT is a Schedule 1 drug and has many health risks associated with its use. Such health risks include:  Intense visuals and hallucinations (which alter the users concept and perception of time and reality), stomach discomfort, overwhelming fear, paranoid thoughts of impending doom, lung irritation, increased heart rate and body temperature.

DMT users can also go into a state of unconsciousness or slip into a drug-induced coma which can lead to death due to the user vomiting or choking to death.