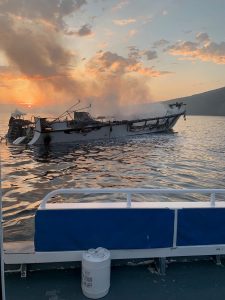 SANTA BARBARA, Calif. – The Search and Recovery efforts continue today for the one remaining victim of the Conception Boat disaster that occurred early Monday morning.  A devastating fire consumed the vessel as it was moored in Platt’s Harbor on the north side of Santa Cruz Island in Santa Barbara County.

On Tuesday, September 3, 2019 search and recovery efforts were successful in locating 13 additional victims, adding to the 20 victims that had already been recovered in the proceeding days.  The majority of the victims were recovered with the technical expertise of the Los Angeles County Sheriff’s dive team, who were able to penetrate into the boat to recover the victims.  The victim’s remains were transported to the Santa Barbara Sheriff’s Coroner’s Office, where the process of identification began.  The Coroner’s Office has received a total of 33 victims from the incident.  The Coroner’s office is charged with identifying each victim, and determining the cause and manner of death.  The remains of a victims from this incident have suffered varying degrees of damage from the devastating fire, requiring DNA analysis to aid in the identification process.

Dive teams report that search conditions remain favorable, with good weather and mild currents.  Search and recovery efforts will continue in an effort to locate the last victim as well as gather information for investigators to assist in determining the cause of this disaster.

Emergency responders encountered “Conception”, a 75-foot commercial diving boat based out of the Santa Barbara Harbor, fully engulfed in fire. The vessel sank to the ocean floor at approximately 7:20 a.m. 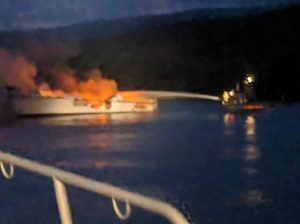 Unified command is established between Santa Barbara County Sheriff’s Office, Santa Barbara County Fire, United States Coast Guard and National Park Service. A one-mile safety zone has been established around the incident as search and rescue efforts continue. Additionally, a 3,000 foot temporary flight restriction has been established around the vessel. The cause of the incident is under investigation and names are being withheld pending notification of kin.

A Family Assistance Center (FAC) has been established at the Earl Warren Showgrounds located at 3400 Calle Real, Santa Barbara, 93105. The FAC will be open until 9 p.m. tonight and will reopen tomorrow, September 3rd at 9 a.m. We request that the public and media respect the privacy of this space for the families of those involved.