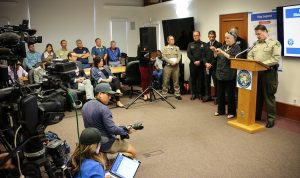 Santa Barbara – At both a press conference and “standing room only” community meeting in Montecito yesterday, February 8, 2018, new storm evacuation definitions, a 72-hour storm evacuation timeline, and an interactive map for Santa Barbara County were announced. Emergency officials reiterated that the threat following the storm and 1/9 debris flow is not over.  There is a heightened danger for those who live below the Thomas Fire burn area due to the damaged condition of the watershed.  Experts say that as a result, it will now take less rainfall to move debris than it did during the 1/9 debris flow event.

“We have to continue to get better and learn more from every disaster,” said Santa Barbara County First District Supervisor Das Williams. “We want to prepare this community for the next event and for the continued clean-up.”

Santa Barbara County Office of Emergency Management Director Rob Lewin said, “Let us not be fooled that the mountains have flushed the debris from the 1/9 debris flow. The mountains and the canyons are still loaded with rocks, sediment, and other debris.”