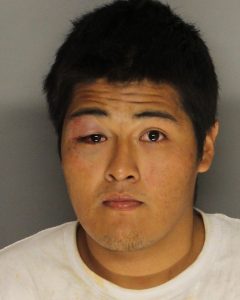 Since the beginning of the current school year there have been several burglaries reported to the Isla Vista Foot Patrol where the suspect entered through an unlocked door or an open window. Most recently, a burglary occurred in the 6600 block of Del Playa Drive late Saturday night October 13, 2018. The suspect entered an occupied residence through an unlocked side door. Two people were home in a bedroom at the rear of the residence when this occurred. When another resident returned home from work and found the suspect, later identified as 20-year-old Marguan David Lara Mendoza of Goleta, in the residence, he confronted Lara Mendoza, who was in the process of stealing items in the living room. The resident and Lara Mendoza, became involved in a physical confrontation when the resident attempted to prevent Lara Mendoza from leaving with the stolen property. Lara Mendoza fled the residence prior to the arrival of law enforcement and was located nearly two hours later. He was arrested and booked at the Santa Barbara County Jail on charges of first-degree burglary and first-degree robbery.  He is being held on $100,000 bail.

The Santa Barbara County Sheriff’s Office wants to take this opportunity to remind our community members that burglary is a crime of opportunity. Here are some safety tips to help prevent becoming a victim of a burglary.