On March 5, 2018, at approximately 7:30 p.m., while removing an inmate from a housing unit, a Santa Barbara County Sheriff’s Custody Deputy was attacked and punched in the face.  The deputy and another responding deputy were able to gain control of the inmate, identified as being 28-year-old Thunderhawk Gutierrez of Santa Maria. The deputy was treated at a local hospital for his injuries and is expected to return to work soon.  The inmate was examined by medical staff and was uninjured.

The case will be forwarded to the Santa Barbara County District Attorney’s Office with the request that the following charges be filed against Gutierrez: Battery on a Peace Officer, Assault likely to cause great bodily injury and Obstructing/Resisting an executive officer. 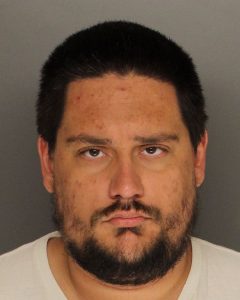 Gutierrez was arrested and booked at the Santa Barbara County Jail on March 2, 2018 by the Santa Maria Police Department for violations of:  Assault likely to cause great bodily injury and Inflicting Corporal Injury on a spouse/cohabitant.  He is being held on $30,000 bail.