Decedent Found 100 Feet Down a Cliff on Winchester Canyon 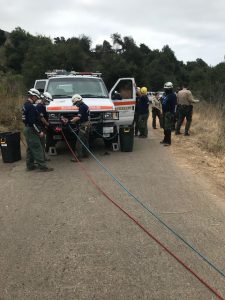 Santa Barbara, Calif. – At 6:30 a.m. yesterday, deputies responded to a 911-Follow up in the 200-block of Winchester Canyon Road. A resident in the area called to report a green Ford Expedition in the roadway, resting on the driver’s side. It appeared to have driven up the right roadway embankment and then rolled down on its side. Units arrived on scene and located the empty vehicle. While deputies were checking the area for evidence, they found a deceased male subject 100 feet down a cliff side, in a creek. The creek is about 20 feet west of where the vehicle was located.

Santa Barbara County Search and Rescue volunteers responded to the scene and used a technical rope system to raise the deceased subject up the side of a cliff to the roadway. Coroner’s detectives have identified the decedent as 36-year-old Michael Currier of Long Beach. Detectives do not suspect foul play.