Carpinteria, Calif. – Patrol deputies in Carpinteria have arrested three suspects for theft of catalytic converters. On Thursday, July 8, 2021 at approximately 2:49 a.m., deputies were dispatched to the 1000-block of Palmetto way for a reported theft of a catalytic converter that had just occurred. The reporting party heard what sounded like a saw, recognized that a theft was likely occurring, quickly called the Sheriff’s Office and provided a vehicle description and direction of travel.

Patrol deputies located and stopped a vehicle that matched the suspect’s within minutes. Inside the vehicle were three occupants, two catalytic converters, two reciprocating saws, and two car jacks. Deputies arrested the three occupants, 39-year-old Rufino Garcia-Vasquez, 37-year-old Gustavo Pineda-Duran, and 34-year-old Samuel Gallegos-Espinoza, all from Los Angeles. They were each booked at the Santa Barbara County Jail for possession of stolen property (felony), grand theft (felony), conspiracy (felony), and possession of burglary tools (felony).  Pineda-Duran was also booked for possession of a controlled substance (misdemeanor), and Gallegos-Espinoza was driving without a license (misdemeanor). All three suspects are being held on $1,000,000 bail.

Lieutenant Butch Arnoldi, who serves as the Chief of Police for the City of Carpinteria said “We would like to thank the community member for calling to report this crime and for providing a vehicle description and direction of travel.” He added, “This is a great example of community awareness that resulted in the successful apprehension of suspects who often slip away undetected.”

Join us at #NationalNightOut in #Carpinteria on Tuesday, August 3, 2021 from 6-8 pm. This FREE nationwide event promotes strong police-community partnerships and neighborhood camaraderie 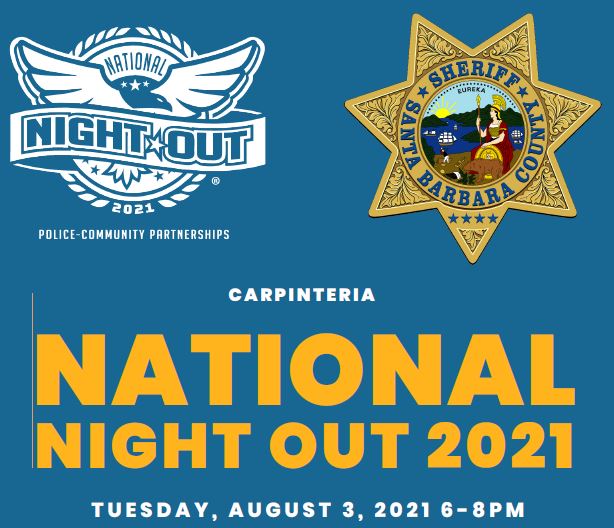