Sheriff’s deputies rescued an unconscious woman out of a structure fire earlier this evening. At approximately 4:53 p.m., Sheriff’s deputies responded with County Fire to a report of a structure fire in the 100-block of Orange Avenue in Goleta. Sheriff’s Deputy Rockwell Ellis and Senior Deputy David Ashley were first to arrive on scene and found an unconscious woman on the floor inside an apartment that was filled with smoke and flames. The woman’s clothing was beginning to catch fire and she was non-responsive. Senior Deputy Ashley patted out the flames on the woman’s clothing and pulled her out the door with the assistance of Deputy Ellis. Once she was outside of the apartment, deputies worked together to carry the unconscious victim down a flight of stairs and to the street. 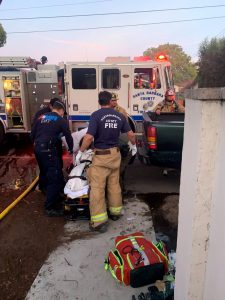 County Fire arrived on scene moments later and began fighting the fire. American Medical Response arrived shortly afterward and took over care of the victim. Additional ambulances were dispatched for the deputies who had inhaled a significant amount of smoke during the rescue. The victim and both deputies were transported to area hospitals. We do not know the status of the victim. Both deputies walked out of the hospital shortly after 7:00 p.m. and are expected to recover.