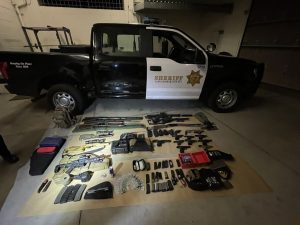 Goleta, Calif. – Deputies conducted a traffic enforcement stop that has resulted in the seizure of 92 firearms and over 90 grams of methamphetamine. At approximately 12:43 a.m. on Saturday, December 5, 2020, deputies in the Isla Vista area saw a Dodge Charger Hellcat peel out in front of pedestrians near Camino Del Sur. Deputies conducted a traffic enforcement stop of the vehicle in the area of Los Carneros and Hollister. During that stop, deputies contacted 36-year-old Kyle Dodge of Goleta. A search of Dodge’s vehicle revealed over 90 grams of methamphetamine and 22 firearms, 12 of which were loaded. Dodge was arrested and booked at the Main Jail for possession of a controlled substance while armed (felony), possession of a silencer (felony), possession of an assault weapon (felony), carrying a loaded firearm in public (felony), possession of a high capacity magazine (felony), manufacturing a short barrel rifle (felony), transportation of a controlled substance for sales (felony), and exhibition of speed (misdemeanor). Dodge is being held on $500,000 bail. 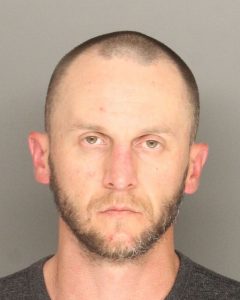 The case was then forwarded to Sheriff’s detectives who conducted a follow-up investigation including authoring a warrant for Dodge’s residence. Detectives served the warrant on Saturday, December 5, 2020 at an address on Vega Drive in Goleta. As a result of the search, they seized 70 additional firearms and approximately 50 containers of ammunition and magazines. This investigation remains ongoing.