Distracted Driving Awareness Month: Put Your Phone Down and Drive! 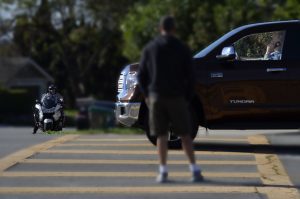 The Goleta Police Department will join law enforcement throughout the state to step up enforcement along with awareness efforts by the California Office of Traffic Safety (OTS) to discourage distracted driving.  Officers will have a special emphasis this month on enforcing all cell phone and distracted driving laws. The goal is to increase voluntary compliance by drivers, but sometimes citations are necessary for motorists to better understand the importance of driving distraction

Traffic officers have issued hundreds of thousands of citations over the past three years to those texting or calling on a hand-held cell phone. Recent legislation now makes it illegal to use your smartphone’s apps will driving.  Still, everyone has seen other drivers on a device driving in a dangerous manner next to them during a commute or a trip around town.

Since 2011, OTS has conducted an observational study of handheld cell phone use every year.  “This year’s study on the use of handheld cell phones and texting shows a decrease over past years; however, more work needs to be done to target those who were observed to still be breaking the law,” said OTS Director Rhonda Craft.  “The best way to put an end to distracted driving is to educate all Californians about the danger it poses. We will do this through enforcement and education efforts like our new advertising campaign “Just Drive”, reminding drivers to put down their phones and focus on the road.”

“California’s distracted driving laws have been saving lives for a decade now,” said former State Senator Joe Simitian, who authored the state’s hands-free and no-texting laws.  “Every day, somewhere in California, someone is sitting down to dinner with their family who wouldn’t have made it through the day without these laws on the books.  That’s tremendously gratifying.”

“Smart phones are part of everyone’s lives now.  Texting, phone calls and posting on social media can be an addicting habit,” said Lieutenant Jason Grossini, Chief of Police Services for the City of Goleta.  “But doing these things can have deadly consequences while driving on our city’s street.  Changing these dangerous habits will help make our roadways safer for everyone.”

The Goleta PD has the following Safety Tips:

The Goleta PD is deploying extra traffic officers, with grant-funded resources, on various days throughout the city. Violators will be stopped and cited, with fines set at $162 for first time offenders.  This campaign is funded by a grant from the California Office of Traffic Safety, through the National Highway Traffic Safety Administration.