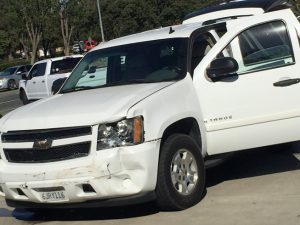 Santa Maria – Five juveniles who were in a stolen vehicle, led Santa Maria deputies on a high-speed pursuit after stealing alcohol from an Orcutt store.  Deputies called off the pursuit due to unsafe conditions, but the vehicle continued to drive erratically until it crashed.  Deputies were able to take four out of the five juveniles into custody.

Shortly before 3:00 PM on Wednesday, September 25, 2019, a deputy in the area of 3300 Orcutt Rd was alerted to a theft that had just occurred at Spencer’s Fresh Market.  The reporting party pointed to a white Chevy Tahoe leaving the parking lot and explained that the occupants had stolen alcohol from the store.  The deputy attempted to stop the Tahoe, but it drove away at a high rate of speed, attempting to evade the patrol car.

The vehicle sped away, eventually turning onto Hwy 135, where it accelerated to over 85 MPH as it approached traffic, and a typically congested area.  Deputies in pursuit called off the chase in the interest of public safety.  After the pursuit was terminated, the vehicle continued to drive at a high rate of speed, until it became involved in a traffic collision in the intersection of South Broadway and East McCoy Ln.  Deputies, alerted to the collision, converged on the scene.  Juveniles began to flee from the vehicle as deputies arrived.  Santa Maria Police officers responded to assist, and ultimately, 4 of the 5 occupants of the vehicle were taken into custody.  It was later determined that the vehicle had been stolen out of Santa Maria city an hour prior.  The alcohol stolen from Spencer’s Fresh Market was recovered in the vehicle.  The Santa Maria Police Department is investigating the stolen vehicle, as well as the crash.

The driver of the vehicle, a 15-year-old male, was arrested for felony evading, possession of a stolen vehicle, conspiracy, shoplifting, minor in possession of alcohol, resisting arrest, and driving without a license.  He was booked into Juvenile Hall.

A 15-year-old female passenger, was arrested for possession of a stolen vehicle, conspiracy, shoplifting, minor in possession of alcohol, and resisting arrest.  She was booked into Juvenile Hall.

A 14-year-old female passenger, was arrested for possession of a stolen vehicle, conspiracy, shoplifting, minor in possession of alcohol, and resisting arrest.  She was released to the custody of her parents.

A 13-year- old male passenger, was arrested for possession of a stolen vehicle, conspiracy, shoplifting, minor in possession of alcohol, and resisting arrest.  He was released to the custody of his parents.

The fifth juvenile is still outstanding.  The investigation is on-going, and investigators have leads as to the identity and whereabouts of the juvenile.