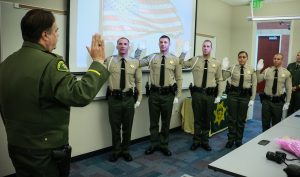 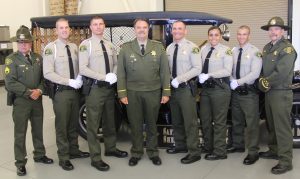 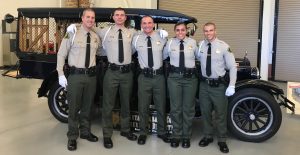 The Santa Barbara County Sheriff’s Office is pleased to officially welcome five new Sheriff’s Deputies to our team. This morning, June 8, 2018, at a traditional ceremony before a room full of dignitaries, family and friends, 13 recruits graduated from the prestigious Allan Hancock Law Enforcement College Academy in Lompoc. Of those graduates, five were hired by the Santa Barbara County Sheriff’s Office and include Joshua Elizalde, Kody Kiesow, Zachary Morphy, Jessika Rios and Austin Swank.

In order to make it to graduation day, the recruits endured 826 hours of training over the past five months. The instruction included laws of arrest, criminal investigations, firearms, emergency vehicle operation, chemical agents, scenarios, report writing and numerous written exams. The training hours do not include the many additional hours they spent at night studying and preparing for tests and scenario based training.

Lt. Steve Johnson who oversees the Training Bureau said this was a special group of graduates. He said, “It was my honor and pleasure to see their growth over the past 21 weeks. This class of recruits showed great perseverance and determination by completing this rigorous but rewarding process. This is just the beginning of what we hope is a long career ahead in law enforcement.”

The Sheriff’s Office congratulates Joshua Elizalde for receiving the Leadership Award and the Defensive Tactics Award. Congrats also to Austin Swank for receiving both the Academic Achievement Award and the Doug Odom Firearms Award. Jessika Rios received the International Footprint Award, which recognizes superior performance, academic excellence, the highest standards in ethics and a true commitment to law enforcement.

The deputies were sworn in by Sheriff Bill Brown prior to the ceremony and received their new badges. They have two weeks of post academy training in-house followed by a period of field training. We welcome each one of our new deputies and wish them a great career ahead with the Sheriff’s Office.

The Sheriff’s Office is always looking for people who want to make a difference and help protect and serve their community. If you are interested in a rewarding career with the Sheriff’s Office go to our website at www.sbsheriff.org and go to the Join Us section of the website to find out more.