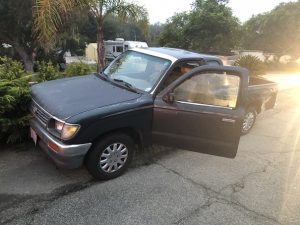 Vandenberg Village, Calif. – This morning, a Sheriff’s deputy was conducting frequent patrol in an area that was recently experience mail thefts, when he spotted a vehicle that had been captured on surveillance days before. On Saturday, residents of Vandenberg Village reported that several of their mailboxes had been tampered with and they provided video surveillance showing a small green truck. At approximately 5:15 a.m. this morning, a deputy who was driving through the area noticed several opened mailboxes and spotted a vehicle near the 200-block of St. Andrews Way that matched the one shown in the video. The deputy attempted to stop the vehicle, but the driver crashed into a mailbox and ran from the car as the deputy approached. A license plate check of the vehicle revealed that truck had been reported as stolen from Nipomo on Sunday, August 16, 2020. 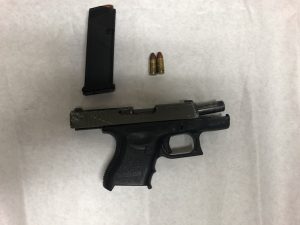 As deputies set up a perimeter and began tracking the suspect, they received a call from a jogger in the area who found a handgun and parts of a cell phone in a nearby intersection. Deputies secured the handgun and had Sheriff’s dispatch send an alert requesting that residents shelter in place. Additional resources responded to assist with the search, including Sheriff’s K9 units, Lompoc Police and the California Highway Patrol.

After tracking the suspect for over two hours, deputies stopped the suspect as he was attempting to enter the backyard of a home in the 100-block of Galaxy Way. The suspect, 32-year-old Andy Aguilera of Lompoc, was taken into custody without further incident at 7:40 a.m. A few minutes later, an additional resident called to report what appeared to be a firearm in the intersection of St. Andrews Way and Clubhouse Road. Deputies recovered pieces of a second firearm from that area and believe it is associated with this incident.

Aguilera was transported to the Main Jail where he was booked for possession of a stolen vehicle (felony), carrying a loaded firearm: not owner (felony), commission of a felony while released on bail (felony), and felon in possession of a firearm (felony). Deputies authored a request for a bail enhancement due to the suspect already being released on bail for another firearms related charge. The request was approved and Aguilera’s bail was increased from $35,000 to $100,000.

The Sheriff’s Office would like to thank the members of the Vandenberg Village community for their diligence in reporting suspicious activity. This arrest was the result of a collaborative effort between the community, the Sheriff’s Office and allied agencies. This investigation is ongoing.