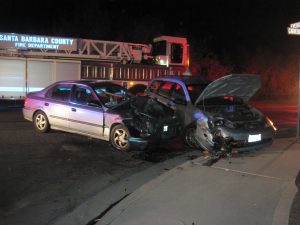 At approximately 8:25 p.m. on February 23, 2018 Santa Barbara County Sheriff’s deputies assigned to the Goleta Valley Patrol Bureau responded with AMR and Santa Barbara County Fire Department to a report of a multi-vehicle accident with injuries near the intersection of Cathedral Oaks Rd. at Evergreen Dr. in the city of Goleta.

Upon arrival deputies found that 51 year-old Kevin Hooser was traveling eastbound on Cathedral Oaks when he lost control of his Ford Focus and was involved in a head on collision with a Honda Civic at Evergreen Drive. The 29-year-old female Santa Barbara resident in that vehicle was transported to Cottage Hospital with serious injuries. Hooser, a resident of Goleta was uninjured and arrested on scene for felony DUI and booked into the Santa Barbara County Jail with bail set at $100,000.00. The traffic collision is also under investigation.