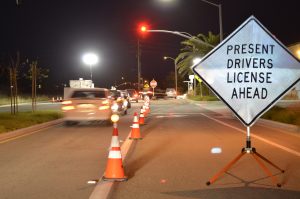 Goleta, CA – As summer comes to a close, the Goleta Police Department is asking drivers to not get behind the wheel after drinking or using drugs that impact your ability to drive safely.

The Goleta Police Department is joining law enforcement agencies across the country in the national enforcement campaign, Drive Sober or Get Pulled Over. During this period, which runs from Aug. 16 to Sept. 2 (Labor Day), the Goleta Police will have additional officers on the road looking for drivers suspected of driving under the influence of alcohol and/or drugs.

In addition to extra patrols, the Goleta Police Department will hold a DUI/Driver’s License Checkpoint Friday, Aug. 16 from 6 p.m. to 3 a.m. at an undisclosed location within the City of Goleta.

Labor Day Weekend remains one of the deadliest times of year for alcohol-involved crashes. According to the National Highway Traffic Safety Administration, there were 376 deadly crashes nationwide during the 2017 Labor Day holiday period (Sept. 1 to Sept. 5). Among those crashes, more than one-third (36%) involved a drunk driver. Last year, two people were killed, and 31 others injured in California on Labor Day alone.

“There are so many ways to get home safely without driving,” Goleta Traffic Sergeant John Maxwell said. “Driving while drunk or high is dangerous, irresponsible and causes too many senseless tragedies. We hope that drivers get the message that driving impaired will never be tolerated.”

Driving while impaired is illegal, whether it is alcohol, prescription drugs, over-the-counter medications or marijuana.

If you plan on drinking or are taking medications that can affect your driving ability, designate a sober driver or use a ride-share service. If you see someone driving impaired, call 911.

Funding for DUI enforcement is provided by a grant from the California Office of Traffic Safety, through the National Highway Traffic Safety Administration.