The Goleta Police Department has been awarded an $85,000 grant from the California Office of Traffic Safety (OTS) for a yearlong program of special enforcements and public awareness efforts to prevent traffic related deaths and injuries.   The Goleta Police Department will use the funding as part of the city’s ongoing commitment to keep our roadways safe and improve the quality of life through both enforcement and education.

“It is an honor to continue our partnership with the California Office of Traffic Safety.  Through this grant, we will be able to provide additional DUI and traffic enforcement activities in an effort to make our streets safer.  Education is a large portion of this grant, providing drivers education on safe driving and providing our deputies education on alcohol/drug DUI detection.  Traffic safety is a high priority in our city and this grant allows us the ability to strengthen our efforts to make your city streets safer,” said Lieutenant Jason Grossini, Chief of Police Services for the City of Goleta. 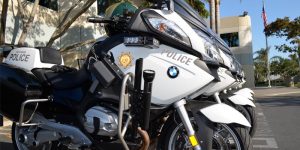 After falling to a ten-year low in 2010, the number of persons killed on roadways has climbed nearly 17 percent across the state, with 3,429 fatalities in 2015.  Particularly alarming is the rise in pedestrian and bicycle fatalities that now comprise nearly 25 percent of all traffic deaths, along with the growing dangers of distracting technologies and the emergence of drug-impaired driving. This grant funding will provide opportunities to combat these and other devastating problems such as speeding and crashes at intersections.

“Unsafe behaviors account for 94 percent of traffic crashes,” said OTS Director Rhonda Craft.  “This grant emphasizes the two most effective ways to change behaviors – education and enforcement.  The Goleta Police Department, with assistance from the Office of Traffic Safety, will use these tools to help keep Goleta streets safe.”

Activities that the grant will fund include:

While alcohol remains the worst offender for DUI crashes, Goleta PD supports the new effort from OTS that aims to provide awareness that “DUI Doesn’t Just Mean Booze.”  Prescription medications and marijuana can also be impairing by themselves, or in combination with alcohol, and can result in a DUI arrest.