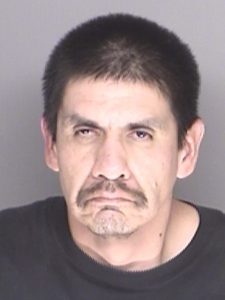 On Wednesday, November 22, 2017, at approximately 12:50 a.m. deputies on patrol in the Santa Maria area conducted a traffic stop on a green Honda Civic in the 1400 block of S. Broadway.  During the stop, deputies contacted the driver and sole occupant who they recognized as 41-year-old Samuel Fuentes.  Deputies were familiar with Fuentes from previous contacts and know him to be on active Santa Barbara County Probation.  During the stop, deputies located “shave keys” commonly used to steal vehicles. During a search of Fuentes person, he was found to be in possession of methamphetamine and drug paraphernalia.  Fuentes was transported to the Santa Barbara County Jail for various felony charges, where he is being held without bail for the probation violation.  The vehicle was later returned to its owner.