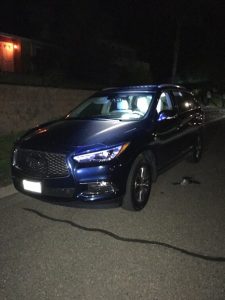 Orcutt, Calif., – On May 28,2020 at 2:07 a.m., deputies responded to the 700-block of Royal Terrace to investigate a report of suspects who were checking the door handles of vehicles and going through vehicles they found unlocked. When deputies arrived in the area, they noticed a suspect getting into a blue Infinity QX60. Deputies ran the license plate on the vehicle and found that the vehicle had been reported as stolen from Arroyo Grande on May 27, 2020. The juvenile suspect was arrested while deputies continued searching the area for additional suspects. Inside the Infinity, deputies found property that was stolen from other vehicles in the area. A minute later, a second juvenile suspect was found and arrested on Royal Terrace. Three additional suspects ran from deputies in the are of Hummel Drive and Glen Cairon Drive.

Deputies set up a perimeter around Hummel and Glen Cairon and dispatch sent out a notification asking residents to stay inside while they searched the area. Santa Maria Police, the California Highway Patrol, along with Sheriff’s K9 units Duke and Thor responded to the scene to assist with the search for the outstanding suspects. Deputies conducted a door-to-door search and at 4:40 a.m., two additional juvenile suspects were located and arrested in the 600-block of Glen Cairon.

This investigation is ongoing and deputies are seeking unreported victims, as well as any video footage of the suspects or the vehicle from this incident. Anyone with additional information is encourage to call the Santa Maria Sheriff’s Substation at (805)934-6150 or email Deputy Riggar at mar4987@sbsheriff.org .