Lompoc Man Arrested for Weapon and Drug Charges in Buellton 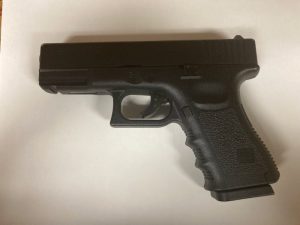 A Lompoc man has been arrested for weapon and drug charges after an incident near McDonalds where he displayed a convincing replica handgun. On Tuesday, August 31, 2021 at approximately 5:34 p.m., deputies from the Buellton and Solvang area responded to a report of a male armed with a pistol inside the McDonald’s, located at 337 McMurray Road in the City of Buellton.

While responding, deputies were updated that the suspect had left McDonald’s, approached an uninvolved person seated in a nearby vehicle, and offered to sell the driver narcotics. During that interaction, the suspect lifted his shirt, displaying what appeared to be a black handgun.

When deputies arrived in the area, they located the suspect, later identified as 21-year-old Elijah Anthony Palacios of Lompoc, and safely took him into custody. A search of Palacios revealed a “Glock style” replica firearm in his waistband. A further search of Palacios revealed narcotics paraphernalia and approximately 1.5 grams of suspected fentanyl. Palacios was subsequently arrested for possession of controlled substance (misdemeanor), possession of narcotic paraphernalia (misdemeanor), and possession of imitation firearm in public (infraction). He was booked at the Lompoc Jail where he was later cite released.