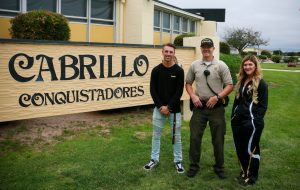 The Santa Barbara County Sheriff’s Office is pleased to introduce the new School Resource Deputy (SRD) for Cabrillo High School and Maple High School in Lompoc. Sr. Deputy Dennis Thomas, a 17-year veteran of the Sheriff’s Office, started his new assignment at the start of the school year and has spent his first several weeks on the job getting to know as many of the students as possible. 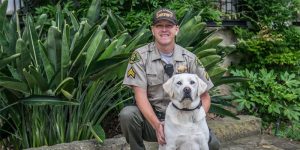 Despite all of his interesting and rewarding assignments, Sr. Deputy Thomas’ dream was to one day become a School Resource Deputy.  He has always felt he worked well with teenagers and wanted to be a part of helping a population he considers to be the future of our country.  He said, “Every student deserves to feel safe while they are getting an education.  My goal is to make sure that each of the 1,250 students at Cabrillo and Maple High Schools are comfortable approaching me, for any reason, and that they feel school is a safe place to be. If I achieve those goals, I will feel as if I have succeeded.”

Sr. Deputy Thomas is also thrilled to be the new assistant coach of the Cabrillo High School Junior Varsity baseball team, another long-time dream of his.  He follows in the footsteps of Sr. Deputy George Hedricks who is the School Resource Deputy and Varsity baseball coach at Dos Pueblos High School in Goleta. 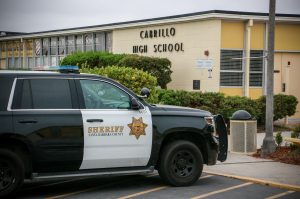 The Sheriff’s Office has a total of four School Resource Deputies at campuses in Goleta, Santa Maria, Lompoc and Santa Barbara.  Their primary role is to act as a liaison between law enforcement, school administrators, students and parents and to provide safety and security to the campuses they serve.

The Sheriff’s Office wants to take this opportunity to thank the former SRD for Cabrillo High School and Maple High School, Sr. Deputy Dan Kohli, for the tremendous positive impact he had during his three years on the job. He was a great example of how to build trust and be a positive role-model/mentor to young people.