On November 2, 2017 at around 6:30 am, detectives from the Santa Barbara Sheriff’s Office, Special Investigation Bureau served narcotic related search warrants in the 700 block of Alondra Dr, Goleta and the 600 block of Calle Ecuestre in the unincorporated area of Santa Barbara County.  Prior to service of the search warrants, detectives conducted traffic stops on the primary suspects.  The first suspect, Jacinto Vasquez, age 38 of Goleta, was stopped as he drove away from his residence.  Investigators found Vazquez had $8,381.00 in cash on his person.  Vazquez was detained for further investigation and transported to the Sheriff’s station.  During the search of Vazquez’s residence, detectives found over an ounce of methamphetamine packaged in several individual baggies for sale and an additional $7,010.00 in cash.

The second suspect, Mercedes Martinez, age 25 of Goleta, was stopped in a separate vehicle driving southbound Highway 101 approaching Goleta.  Investigators found Martinez in possession of over an ounce of methamphetamine packaged in several individual baggies for sale.  Martinez was detained and transported to the Sheriff’s station for further investigation.  During the search of Martinez’s residence, detectives found $85,184.00 in cash hidden within the residence.

While searching both residences, numerous other people were detained, but were released when it was determined those individuals were not involved in the narcotic sales.  Additionally a California Highway Patrol K-9 unit and a Sheriff’s K-9 unit trained in narcotic detection assisted in the search of the residences and vehicles. 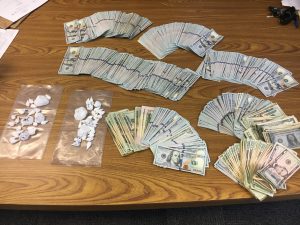 After completing the investigation, both Vazquez and Martinez were booked into the Santa Barbara County jail for conspiracy and possession of methamphetamine for sale. Their bail is set at $1,000,000. In total, the Sheriff’s Office seized over two ounces of methamphetamine and $100,575.00 in cash.