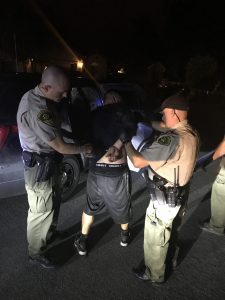 On Tuesday, June 18, 2019, at about 9:00 pm, Sheriff’s Dispatch received a call from a homeowner in the 1200 block of Cosima Lane regarding an unknown male subject who had broken a window and entered into their residence.  While deputies were responding, dispatch received a separate call from an adjacent residence that the subject had also entered their home.  Deputies arrived quickly and located 31 year old Albert Gonzales Padilla, Jr of Orcutt on a rear patio.  Deputies took Padilla into custody without incident and he was later booked into county jail.  Padilla is being held without bail for violation of probation, trespassing, prowling, and public intoxication.