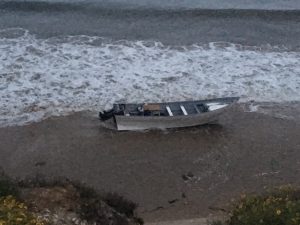 At approximately 1:00 a.m. this morning, May 12, 2018,  Santa Barbara County Sheriff’s narotics detectives conducted surveillence in the area of Arroyo Quemada and HWY 101 in the County of Santa Barbara in an attempt to combat “Panga style” boats smuggling marijuana. At approximately 4:45 a.m., Sheriff’s detectives observed a dark colored truck in the area of Arroyo Quemada Lane and Highway 101. After several minutes the truck left southbound on Highway 101, where detectives began to follow it. The truck exited Dos Pueblos Canyon Road and subsequently stopped approximately a half mile later. Prior to making contact with the vehicle, the unknown Hispanic male exited the vehicle and fled into a nearby creekbed. After checking for any additional occupants, detectives observed more than one dozen bales of marijuana consistent with those smuggled into the United States by Mexican Drug Trafficking Organizations in the rear cargo area of the truck and within the passenger compartment. 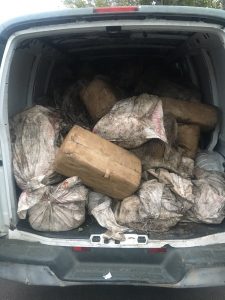 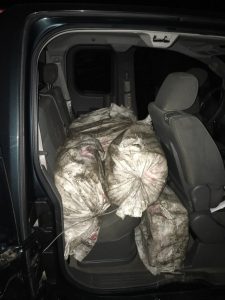 After broadcasting this information out to additional surveillence units, three additional vehicles were seen entering and leaving the area of Arroyo Quemada Lane at high rates of speed, consistent with past drug smuggling operations. The vehicles were subsequently stopped and an additional van was discovered loaded with several dozen additional bales of marijuana. The other two associated vehicles were stopped revealing multiple subjects who smelled of fuel and were covered in sand and water. This is consistent with smugglers transfering marijuana bales from the panga boat to load vehicles.

A subsequent search of the coast line immediately adjacent to where all four vehicles were seen revealed a large panga-style boat consistent with marijuana smuggling. In total, 18 males were arrested in connection with the smuggling operation and more than 120 bales of marijuana were seized weighing in at more than 3,000 pounds.

Sheriff’s Narcotics Detectives were assisted in responding to this incident by personel from the Sheriff’s Special Enforcement Team, Sheriff’s patrol deputies, the California Highway Patrol and Homeland Security Investigations.

The incident is under investigation and the identities or information on those arrested is not being released at this time.