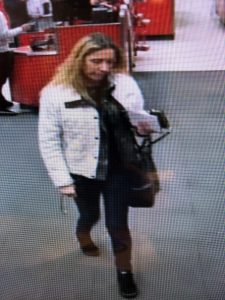 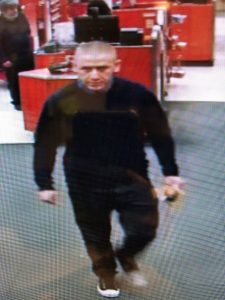 Carpinteria, Calif. – On Thursday, January 9, 2020 at 8:18 p.m. suspects smashed the window of a vehicle in the parking lot of 3208 Via Real, in the unincorporated area of Carpinteria and stole items from the vehicle. Video surveillance showed the suspects arrive at the location in a white colored Toyota Prius with black rims/wheels. A wallet, briefcase, and a rose gold colored iPhone 6 Plus were stolen from the vehicle.

The victim’s credit cards were later used between 9:00-9:30 p.m. the same night at both Target stores in Ventura. The suspects arrived at Target in the same vehicle used during the burglary. Surveillance from Target shows the unidentified suspects.  Please see the attached photos.

The Sheriff’s Office is requesting anyone that has information about this crime, or that can help identify the suspects, email Deputy Ellis at rme4608@sbsheriff.org. You can also contact the Santa Barbara County Sheriff’s anonymous tip line at 805-681-4171 or visit our website