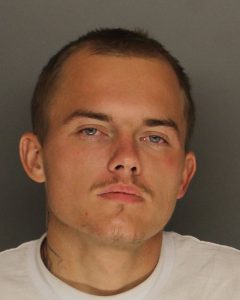 At approximately 12:30 p.m. on November 16, 2018, Sheriff’s deputies responded to investigate a burglary from the previous night at a ranch in the 1200 block of North Glenn Annie Road, in a rural area just north of the City of Goleta.  During the course of the investigation, the responding deputy interrupted a suspect attempting to steal a vehicle from the ranch property.  The suspect, later identified as 20-year-old Santa Barbara resident Jakub Hanasz, ran from the deputy up the steep terrain of the property.  Based on the evidence at the scene, deputies believed Hanasz may have an edged weapon or firearm.

Sheriff’s deputies began searching the area and were joined by a Santa Barbara County Sheriff’s/Fire Air Support helicopter along with three Sheriff’s K-9 teams.  A perimeter was established and deputies soon after contacted 25-year-old Joaquin Diaz of Santa Barbara leaving the area.  Diaz had an outstanding warrant for his arrest and had suspected stolen items from the ranch property. 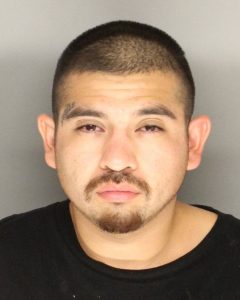 With information that there was still an outstanding suspect, deputies conducted an exhaustive search of various structures on the ranch.  The specialty trained K9 units were able to quickly start tracking the suspect’s path.  After two hours of methodical searching, at approximately 4:00 p.m., 20-year-old Jakub Hanasz of Santa Barbara was found hiding under a lemon tree. Hanasz ran from deputies again and with the assistance of a K9 was apprehended a few hundred yards away down a steep embankment from where he had just been hiding.

The investigation revealed that Hanasz was in possession of a truck that had been stolen from the City of Santa Barbara the prior week.  The truck contained various items stolen from the ranch property and other high value items also believed to have been stolen.  There is also evidence that both Hanasz and Diaz were working together in an attempt to steal two different vehicles from the ranch.

Technicians from the Sheriff’s Forensics Unit responded to process the vast scene and to collect the multiple items of evidence.  The investigation is continuing and efforts will be made to match recovered items to other crimes.  While several items from the residence were not able to be recovered, the stolen truck was returned to a very grateful resident in Santa Barbara.

Hanasz was arrested and booked on the charges of residential burglary, conspiracy, vehicle theft, attempted vehicle theft, possession of stolen property, resisting and delaying a peace officer and for violation of probation.  He is being held without bail.

Joaquin Anthony Diaz was booked on charges of residential burglary, conspiracy and attempted vehicle theft in addition to an outstanding warrant for his arrest.  He is being held on $55,000 bail.

This case is another great example of teamwork and communication from all of those involved.   The combined utilization of the K-9 Units and Air Support was vital in the search and apprehension of the suspects in this challenging terrain.