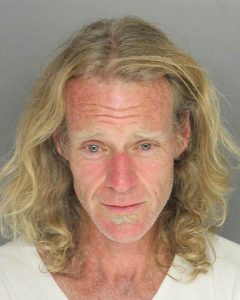 Goleta, Calif. –  This morning, deputies responded to the bluffs area in the 8300-block of Hollister on a report of an attempted theft that had just occurred. The victim reported that a male subject had punched her several times while trying to steal her property. The victim had multiple injuries but declined emergency medical attention. Deputies responded to the area, established a perimeter for a K9 search. A notification was sent to area residents with the suspect description while deputies and K9 units spent over two hours searching for the suspect.

Shortly before 5 p.m. this afternoon, UCSB Police Officers located the suspect near Anisq’Oyo Park in Isla Vista. They detained the suspect and turned him over to Sheriff’s deputies who arrested him and transported him to the Main Jail. The suspect, 44-year-old Loren Allen of Goleta, has been booked for attempted robbery (felony) and battery (felony). He is being held on $50,000 bail.