In the past, Sheriff Brown credited long-term declines in our local crime rates to the collaborative efforts occurring within our communities and throughout the criminal justice system in Santa Barbara County.  He shared that, “Our law enforcement, prosecutors, public defenders and the courts are all working together to improve public safety within our communities.”  According to Sheriff Brown, “significant work has been done to reduce criminal recidivism by offering important rehabilitative programming to inmates in our jail. Our efforts are also greatly enhanced through collaboration with other county departments and many community-based organizations.  Together we are working to enhance the safety and wellbeing of Santa Barbara County.”

With respect to this past year, Sheriff Brown pointed out that, “2020 brought significant challenges and changes to the criminal justice system in Santa Barbara County, including a significantly reduced jail population due to the adoption of emergency zero-dollar bail practices at the state and local level.  We are concerned that those changes may have had a negative impact on crime rates, and, in-turn, resulted in an increased fear of crime in our communities.”  Sheriff Brown further explained, “We are closely scrutinizing this crime data and will continue to seek ways to maintain public safety by targeting certain criminals, but also by holding offenders accountable through alternatives to jail.  These include working with our criminal justice partners to enhance offender supervision, provide additional mental health and substance abuse-related services, and strengthen education-based recidivism reduction efforts for those who are in custody.”

The Sheriff’s Office compiles information about crimes occurring within the communities it serves and submits this information for inclusion within the Federal Bureau of Investigation’s Uniform Crime Reports system (UCR).  For the purposes of the UCR system, reports are broken down into two major categories: Part 1 crimes, which are the most serious in nature, and Part 2 crimes, which includes a number of lesser criminal offenses and some juvenile status offenses.  Part 1 crimes are further broken down into two subcategories: violent crimes and property crimes.  Part 1 violent crimes are offenses that involve force or a threat of force and include criminal homicide, forcible rape, robbery and aggravated assault.  Part 1 property crimes are theft-related offenses that do not involve threats or force against the victim, including burglary, larceny-theft and motor vehicle theft.

On an overall basis, Part 2 (lesser) crimes were down by 15% over the previous year.  Detailed analysis showed that almost all categories of Part 2 crimes declined or remained statistically similar to the prior year.  The two exceptions to this were DUI violations (17% increase) and Disorderly Conduct (28% increase).  Part 2 crime categories that experienced statistically relevant declines over the previous year included simple assault (18% drop), public drunkenness (32% drop), sex offenses (28% drop) and the catch-all category for all other violations (25% drop).  Juvenile offenses related to curfew and runaways experienced a combined 39% decrease in 2020.

The Sheriff’s Office is honored to be afforded the opportunity to provide policing services for the cities of Buellton, Carpinteria, Goleta and Solvang.  Our effectiveness in maintaining public safety within each of these cities is the result of ongoing collaboration with their city councils, their leadership teams, and the communities we serve. We are committed to working with our contract cities to address negative crime trends that arise.

The Sheriff’s Office is providing detailed breakdowns of the crime stats for review and use by the media and/ or media members.  We are also providing several graphics for media use. 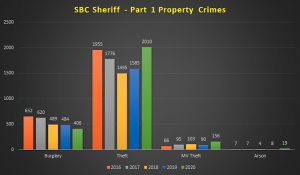 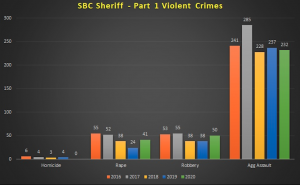 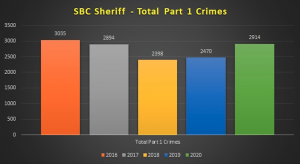 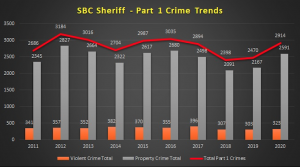