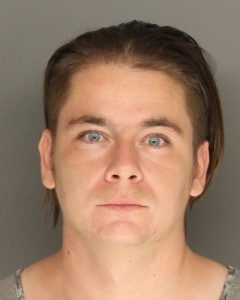 Lompoc – On July 24, 2019, Santa Barbara County Sheriff’s Detectives arrested 20-year-old Colton Blu Mastagni in the 1500-block of North H Street in Lompoc on sexual assault related charges.  Mastagni is accused of sexually assaulting the victim on two separate occasions over the past year.  Mastagni was arrested without incident and booked into the Santa Barbara County Jail on the following charges:  261(a)(2) P.C. – Forcible Rape, 287(c)(2)(A) – Oral Copulation with Force, 236 P.C. – False Imprisonment, and 220(a) P.C. – Assault with Intent to Commit Rape, with bail set at $100,000.  Mastagni remains in custody on these charges.

Anyone with information related to this investigation or any other sexual assaults committed by Mastagni is encouraged to contact the Santa Barbara Sheriff’s Office Criminal Investigations Division at (805) 934-6170.