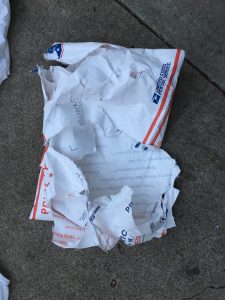 At about 4:00 p.m. today, February 8, 2018, a Santa Barbara County Sheriff’s Deputy found a suspicious package near the Santa Barbara County Courthouse located in the 100 block of E. Figueroa Street in Santa Barbara. While performing a security check, the deputy discovered a white plastic United States Postal Service mailer package in a driveway used by the Sheriff’s Jail Transportation Unit to transfer inmates from custody facilities to their court appearances. The deputy followed standard safety procedures for this type of incident and contacted court/custody personnel and a Sheriff’s supervisor.

Because the origin of the package could not be determined, all Santa Barbara Superior Court personnel evacuated the building. The Sheriff’s Bomb Squad responded and used remote procedures to approach and open the suspicious package. Santa Barbara Police Department officers assisted with traffic control and Santa Barbara City Fire personnel stood by while the package was examined and then opened. Sheriff’s bomb technicians found several items of clothing inside but no explosive or dangerous items.