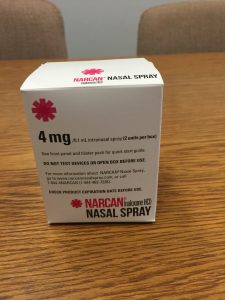 At approximately 5:45 p.m. last night, February 1, 2019, Santa Barbara County Sheriff’s deputies from the Solvang Station, Santa Barbara County Fire personnel, and American Medical Response (AMR) personnel responded to a residence in the 100 block of Kalawa Shaq in Santa Ynez for a report of an unresponsive 29-year-old male. The reporting party told Dispatchers that the man was unconscious and not breathing.

A deputy assigned to the Chumash Reservation and surrounding Santa Ynez Valley was the first to arrive on-scene within minutes of the initial call. Upon arrival, the patient was unresponsive and had begun to turn blue. Believing this was an opioid overdose, the deputy administered a single dose of his department issued Naloxone nasal spray. That same deputy then began CPR on the patient. Once Santa Barbara County Fire personnel arrived on-scene they took over lifesaving efforts. Prior to being transported to the hospital, the patient was alert and breathing on his own. The patient was then transported to a local hospital by AMR medics for further treatment.

The Sheriff’s Office has deployed naloxone 17 times since our program became operational in April of 2017.