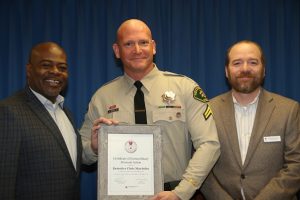 Santa Barbara – In a ceremony held at Sheriff’s Headquarters, Santa Barbara County Sheriff’s Detective Christopher MacAuley was presented with the American Red Cross Lifesaving Award for his successful intervention which saved the life of a one-year old child.

American Red Cross Central California Region CEO Tony Briggs and Board Chair Robert Rauchhaus presented the award to Detective MacAuley.  Sheriff Bill Brown, and the Sheriff’s executive and command staff, along with friends, family and co-workers of Detective MacAuley were on hand to congratulate him on the occasion.  MacAuley remarked that he had never seen a look as horrifying as the face of the father when he handed him his child.  “I am just glad that I was there, and able to get the child breathing again.  I was as relieved as the father.”  Detective MacAuley is a 10-year veteran of the Santa Barbara County Sheriff’s Office.