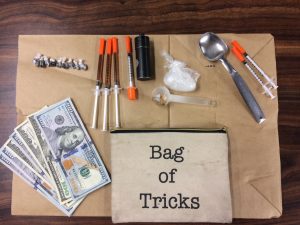 At approximately 10:45 p.m. last night, August 3, 2018, Sheriff’s Detectives from the Special Investigations Bureau, while assisting the Santa Barbara Police Department with saturation patrols, conducted a traffic enforcement stop on a vehicle speeding in the area of E. Cota and N. Salsipuedes St.  During the stop, a passenger was found to be in possession of a methamphetamine pipe and hypodermic syringes.  Following this discovery, additional searches were conducted and nine bindles of heroin totaling approximately 6 grams were located, along with three heroin loaded hypodermic syringes, 8 grams of methamphetamine, and $700 in cash believed to be related to illegal narcotics sales.  These illicit items were located both inside the vehicle and on the persons involved in this investigation.