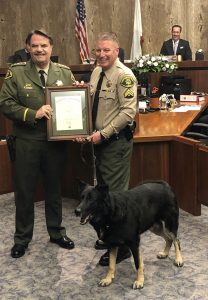 After six years of fighting crime and helping to save lives in Santa Barbara County, Sheriff’s Office, K-9 Aco (prounounced ah-co) is officially retired.  Aco’s last night of work with his partner, 23-year Sheriff’s Office veteran, Sr. Deputy Kenneth Rushing was on New Year’s Eve.  Today, January 8, 2019, he received a retirement certificate, a rawhide bone and a huge round of applause at the Santa Barbara County Board of Supervisors meeting.

Aco was an accomplished K-9 during his time at the Sheriff’s Office with more than 200 suspect finds and give-ups and 31 physical apprehensions.  He is trained in patrol, narcotics detection, hard-surface tracking and has completed specialized SWAT canine training.  During his career, Aco sniffed out and located thousands of pounds of narcotics.  In August of 2015, Aco received the prestigious Flir Fang award for tracking down a drive by shooting suspect in Lompoc. 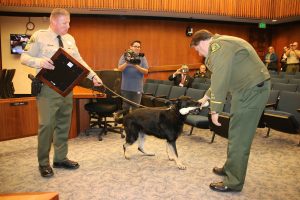 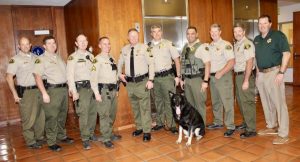 Aco and his partner Sr. Deputy Rushing were known for their tireless, pro-active pursuit county-wide of criminals, day or night, who were evading capture, many of them violent felons and burglars.  Aco also assisted on numerous searches for evidence and lost or missing people.  He has been involved in a large number of building searches, alarm calls and deputy protection during major disturbances.  In addition to all of his crime fighting accomplishments, Aco has participated in hundreds of exhibitions for thousands of people including civic groups and clubs, private organizations, youth groups and schools. 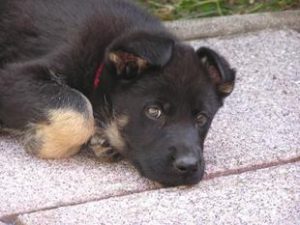 Aco, whose full name is Aco Vom Brachpetal, was born in Germany in 2010.  He attended training at the Inglis Police Dog Academy in Ventura County before coming to work at the Sheriff’s Office in February of 2012. He was paired to work with Sr. Deputy Rushing who has 13 years of experience as a handler.  He said Aco was a natural patrol dog and loved coming to work.  “He jumped up to go to work.  We were constantly training and all of that hard work paid off. Aco’s desire and his drive was channeled into what our objective was. He wanted to catch the bad guy even more than I did.”

Even though Aco continues to live with the Rushing family, Sr. Deputy Rushing is getting used to being on patrol without his partner.  He said, “When you are doing what you are passionate about, it doesn’t feel like work and before you know it, your dog is almost nine years old.  I want to thank Aco for always having my back. He gave his service life to this profession and protected me and my partners on patrol.” 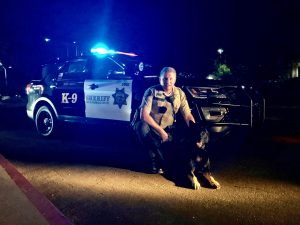 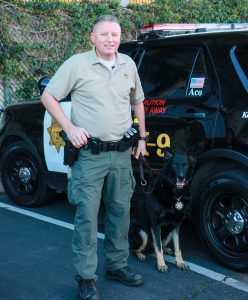 Aco was purchased for the Sheriff’s Office by a generous private donor.  The Sheriff’s Office is fortunate to have a thriving K-9 Unit that would not be possible without the ongoing support of the Sheriff’s Benevolent Posse’s Project Deputy Dog fundraising program and the donations from the community.  If you want to help support our K-9 Unit, please go to www.sbsheriffsposse.org and click on the Project Deputy Dog tab.  We are in the process of purchasing a replacement for Aco and appreciate your support.

Thank you K9 Aco for your dedicated service.  We hope you enjoy a well-deserved retirement life with the Rushing family. 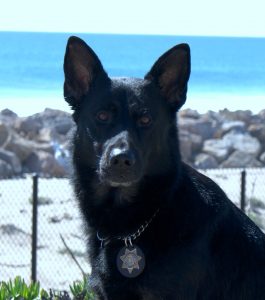