The Santa Barbara County Sheriff’s Office hosted a ribbon cutting ceremony today at the new Northern Branch Jail on Black Road in Santa Maria. This long-anticipated ceremony marks the completion of over 5 years of construction on a one-of-a-kind facility. In attendance were dignitaries from numerous county agencies, members of the media, community members, as well as current and retired Sheriff’s Office staff. 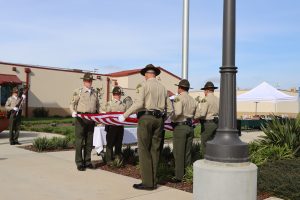 The ceremony began with an invocation prayer by Sheriff’s Chaplain Paul Berry, followed by the posting of colors, and pledge of allegiance by the Sheriff’s Honor Guard. Custody Deputy Jasmin Cruz sang the National Anthem while the Honor Guard raised the American flag for the first time. 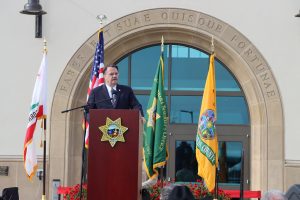 Sheriff Brown then spoke, beginning by thanking all of the staff and contractors who spent years working on this monumental project. Sheriff Brown said “This has been a lengthy odyssey. It began as a quest for solutions to address the significant and chronic overcrowding in the Main Jail, but it evolved into a way of finding smarter and more effective ways to incarcerate and reform offenders, reduce recidivism, and make our community safer.”

Sheriff Brown shared all of the starts and stops, hurdles and successes that were encountered along the way and closed his remarks by reading excerpts from a letter that he received from a former inmate. The woman, whose identity is being shielded with a pseudonym of “Connie”, sent a 12-page, handwritten letter to Sheriff Brown in August of last year wherein she wrote in great detail about 19 Custody Staff members – lieutenants, sergeants, corporals and deputies — who had treated her with respect and kindness, and inspired her to be a better person.  She said that while in our jail she had been taught time management, dependability, skill excellence, mindfulness, observation, workplace courtesy, selflessness, and professionalism.

She wrote, “In this jail, if a person doesn’t change it isn’t because you have failed to provide the resources. It is because they simply don’t want (to change). Most inmates do not think they are worth the time of day to be spoken to on an intellectual level. And when an officer speaks to us (with) wisdom and intellect, it is a conversation we will never forget. That officer will also have gained the respect of that inmate forever. That inmate will also influence other inmates to respect that officer and will speak well of them. … The result is these generous acts of kindness and gentleness have taken a broken woman and healed her into someone great. I am not doubtful that in the end, my victories and accomplishments will be nothing shy of great. Because God has so willed it, by providing this experience under the care of your authority.”

She ended her letter with these words: “I hope that you will keep this letter for when your years as Sheriff are done. If you ever doubt, if you ever question, whether you did enough, if your efforts ever yielded results, just read this letter. Be comforted, and remember the answer is yes, remarkably so.”

Sheriff Brown offered that Connie’s letter was not only meant for him, but for each of us as well and said “There are a lot of people like Connie in our jail system. People who have made mistakes, who have hurt others by theft, neglect or violence. People who have struggled with rough childhoods and difficult lives perhaps checkered by impulsiveness, thoughtlessness, cruelty and addiction, but people who are nevertheless bright, willing to learn, searching for meaning and willing to be inspired. People who are resilient, who are willing to change and who are redeemable.” 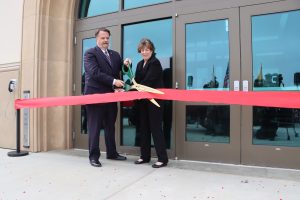 Sheriff Brown closed his remarks by saying “Today let us be mindful of what the New Northern Branch jail means for the future:  enhanced safety and convenience for the community, better working conditions for our incredible custody staff, and more opportunities for revitalized lives, lower rates of addiction and recidivism, and — for many former offenders and their families – a future filled with happiness, hope, sobriety and success instead of discouragement, hopelessness, addiction and misery.”