The Santa Barbara County Sheriff’s Office would like to congratulate the Sheriff’s employees who were honored today, April 11, 2018, at a Recognition Awards Program and Luncheon.  The award recipients were recognized for their exemplary service during 2017 at a ceremony held at Earl’s Place at the Earl Warren Showgrounds. 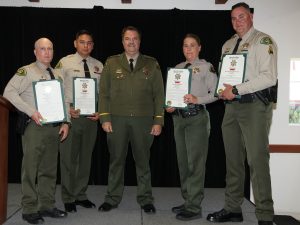 The Sheriff’s Medal of Courage award was given to seven Sheriff’s deputies for their response to a large wildfire that broke out on July 8, 2017 near Camp Whittier where hundreds of students were attending summer camp.  When deputies arrived, large flames and thick smoke surrounded the camp with children and staff members frantically trying to flee the fire. Without hesitation, Special Duty Deputy Ray Gamboa, Special Duty Deputy Daniel Nelson, Deputies Brice Bruening, Shaelyn Green, Jeremy Rogers, Luis Ruiz and Donna Wilson helped safely and quickly evacuate more than 400 people out of Camp Whittier.  The deputies then helped conduct evacuations at the Lake Cachuma Campground and attempted to reach children and staff members trapped by fire at the Circle V Ranch. They had to back out of the fire zone but returned once fire personnel cleared a path to reach the camp. Their quick, resolute and heroic actions resulted in the successful evacuation of hundreds of children and adults caught in the path of this rapidly spreading wildfire.

Sheriff’s Sergeant Neil Gowing and Sheriff’s Deputy David Wicklund received a Meritorious Service Award for their response when the Whittier Fire broke out.  Sgt. Gowing and Deputy Wicklund helped coordinate an evacuation effort that led to the safe exit of hundreds of campers at Lake Cachuma.  Sgt. Gowing led the effort to valiantly reach those trapped at Circle V Ranch by driving down the dirt road but when flames engulfed the roadway, the deputies were unable to proceed any further. 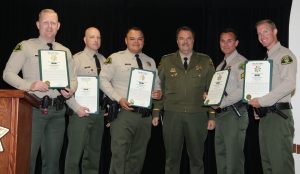 Five Sheriff’s deputies who were assigned to the Isla Vista Foot Patrol received a Meritorious Service Award for their response on October 21, 2017, to a college student who fell from a cliff. Sgt. Christopher Gottschall and Deputies David Ashley, Eduardo Cazarez, Shane Moore and Matthew West put their own safety at risk to reach the patient who had fallen 40 feet onto the sand and was being pulled out to sea by the waves.  The group carried the patient through the surf to the nearest beach access almost 150 feet away and up three flights of stairs.  They provided life-saving measures until paramedics arrived and subsequently assisted with rescue breathing and transport preparation.

Sheriff’s Special Duty Deputy Desiree Thome and Sheriff’s deputy Jeffrey Owen also received a Meritorious Service Award for their response to a single vehicle rollover accident on December 11, 2017.  The deputies climbed through broken glass to reach the occupant who was pinned inside and not breathing.  The deputies helped extricate the victim through the smashed rear windshield.

Four Sheriff’s Deputies were recognized with a Lifesaving Award.  Sheriff’s deputies Steven Gonzales, Jesus Gutierrez, Isacc Munoz and Sandra Rivera all helped save the lives of victims who suffered heart attacks and were not breathing.  In each case, they arrived on scene quickly and provided lifesaving medical care, which included the use of an automated external defibrillator and application of chest compressions, until paramedics arrived and could take over. 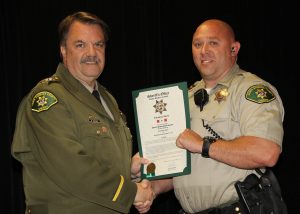 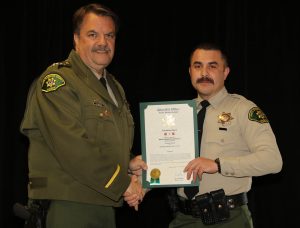 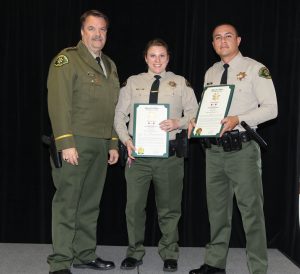 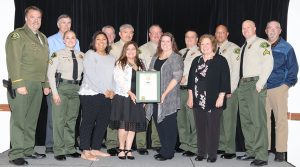 The Human Resources Bureau received the Sheriff’s Unit Citation Award for its unprecedented task of hiring more than 164 full time employees and completing more than 100 volunteer and contractor investigations from January of 2016 to December of 2017.  The unit is comprised of a Sheriff’s Lieutenant, Sergeant, Background Investigators, Administrative Office Professionals, a Recruiter and a Polygraph Examiner.  The members of the Human Resources Bureau serve as the gatekeepers for entrance into the law enforcement profession and magnify the values of the Sheriff’s Office. 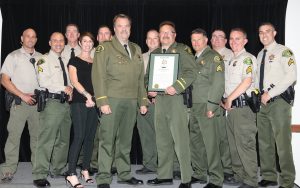 The Sheriff’s Special Investigations Bureau (SIB) also received a Unit Citation Award.  SIB continued to be successful despite financial and staffing challenges.  In 2017, they made 163 felony arrests, 48 misdemeanor arrests, seized 55 firearms, 3.75 pounds of heroin, 2.16 pounds of methamphetamine, 82,500 marijuana plants, 1,700 pounds of processed marijuana, almost two pounds of cocaine, 2.4 ounces of fentanyl and almost $160,000 dollars in cash.  They also helped in the apprehension of three homicide suspects and assisted in multiple investigations. They conducted proactive operations to rescue human trafficking victims.  In 2017, 45 human trafficking victims were identified, 15 pimps were arrested and 35 other suspects were arrested for arranging to purchase sex. 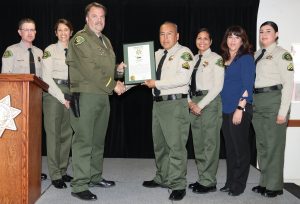 The Sheriff’s Transportation Unit received the third Unit Citation Award.  Despite being understaffed and working mandatory overtime, they traveled more than 155,000 miles and transported more than 49,000 high profile, high risk, mentally and medically unstable individuals throughout Santa Barbara County and the State of California.  Custody Deputies assigned to the unit also helped evacuate victims trapped by flooding at El Capitan Canyon and Resort Campgrounds.  Also, throughout the first quarter of 2017, they helped transport the 12 Operation Matador suspects.  Custody Deputies also located a backpack with a loaded handgun, a knife and drugs in a Lompoc court holding facility.

The Sheriff’s Office wants to thank all of the award recipients for their exemplary service to the community.