The Santa Barbara County Sheriff’s Office would like to congratulate the Sheriff’s employees who were honored today, April 12, 2019, at a Recognition Awards Program and Luncheon held at Earl’s Place at the Earl Warren Showgrounds.  The award recipients were recognized for their exemplary service during 2018.

The awards included many that were recognized for their response during the Thomas Fire and Debris Flow.  In fact, a Major Incident Commendation bar was given to all Sheriff’s employees who were involved in handling these two disasters.  This is only the second time the Sheriff’s Office has ever awarded a unique enameled commendation bar to all employees involved in a critical incident.  The other time was following the Isla Vista Mass Murders in 2014.  Sheriff Brown said it was important to recognize those who responded to these twin disasters.  He said, “The 1/9 Debris Flow, caused by the Thomas Fire, was the greatest natural disaster in the history of Santa Barbara County. The sustained nature of the rescue and recovery efforts, coming as they did on the heels of the fire, tested our people as never before. The men and women of the Sheriff’s Office rose to the occasion. It is fitting that everyone involved in these operations – first responders and those who directly supported them alike – receive special recognition for an extraordinary team effort.”

The Sheriff’s Unit Citation, which recognizes a unit for outstanding service resulting from a team effort, was given this year to the Sheriff’s Special Enforcement Team.   In addition to its 13 call outs in 2018, this highly trained, skilled tactical team was recognized in particular for its work in rescuing and evacuating people in the hours and days that followed the 1/9 Debris Flow.  SET members worked with Sheriff’s Search and Rescue Team members to reach people who were trapped. 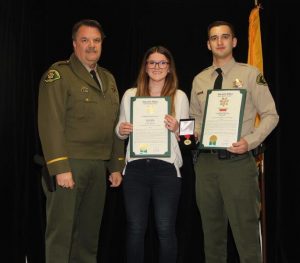 A Medal of Courage was presented to newly-hired Custody Deputy Zachary Salce and his girlfriend, Maddison Henslin, received an Exceptional Civilian award for their courageous actions on the night of November 13, 2018. The two heard the screams of a woman trapped in an apartment fire in Lompoc and rushed to the scene. Salce kicked open the door and the two crawled under smoke and flames, reached the elderly woman and pulled her out to safety.

The Sheriff’s Medal of Courage was given to Sgt. Brian Dickey for his response on July 21,2018 to a suicidal man in a motorhome at Jalama Beach.Campground.  The man had a loaded gun and was threatening to shoot himself.  At one point, he had the gun pointed at his head.  Sgt. Dickey built a rapport with the man and convinced him to drop his gun and he was detained without incident. 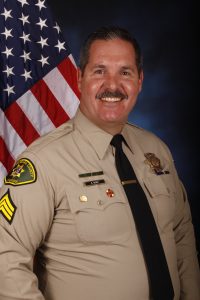 Four more Medals of Courage were given to Acting Sgt. Dan Nelson, Deputies James Furber, Mark Riggar and Michael McNeil.  These four deputies responded to the scene of what ended up being a triple homicide in Orcutt. They entered an Oakhill Estates home after being told by the reporting person there was a person inside covered in blood. They confronted a suspect inside the home armed with a rifle. The deputies attempted to deescalate the dangerous situation by talking to the suspect and trying to get hm to surrender peacefully. Their swift and decisive actions led to his containment. The Special Enforcement Team arrived and took over the incident, but after using less lethal means in an attempt to disarm and apprehend the suspect, he presented a direct threat to deputies and was fatally wounded. 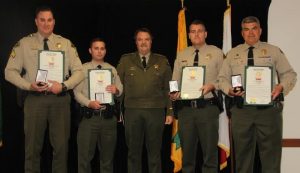 A Distinguished Service Medal was given to former Undersheriff Bernard Melekian for his forty plus year career in law enforcement and his guidance and leadership during his time at the Sheriff’s Office. “He was a mentor to many of our people and he had a tremendous impact on our agency during his tenure,” said Sheriff Brown. 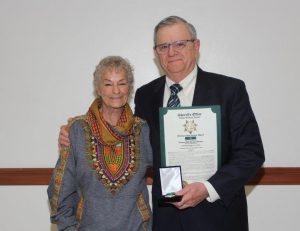 Long-time Administrative Office Professional Evalee Treen was also awarded a Distinguished Service Medal for her 29 years of service to the Sheriff’s Office and in particular for her work with our Sister Cities Program. In 2003 she developed a law enforcement exchange program between Santa Barbara and Puerto Vallarta.  The lives of numerous Mexican police officers have been saved or made safer as a result of the training that has been provided.

A Meritorious Service Medal was given to Lt. Eddie Hseuh for work in developing and providing a comprehensive Crisis Intervention Training program to Sheriff’s Office and other Santa Barbara County law enforcement personnel. He dedicated hundreds of hours to the development of the Behavioral Sciences Unit, which now coordinates the Sheriff’s Office’s response to people suffering from mental health issues. 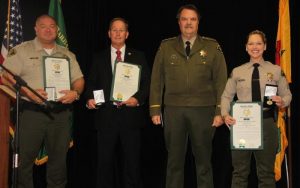 Retired Sheriff’s Lt. Brad McVay was also given a Meritorious Service Award for the work he did to revamp and streamline our contract city contracts and develop the Contract Law Bureau. The result is a much improved, efficient system that benefits the Sheriff’s Office and our four contract cities.

Custody Deputy Crystal Batterson was recognized with yet another Meritorious Service Medal for her tireless work in 2018 conducting in-depth jail investigations.  In 2018, she wrote more than 30 investigative reports and assisted with many others.  One in particular led to the discovery of an inmate with a cell phone inside an Arizona state prison.  Her efforts disrupted criminal activity and led to a significant number of seizures of drugs and other contraband. 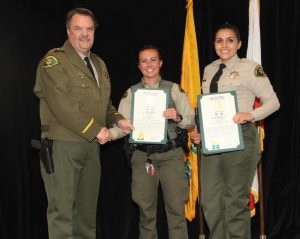 Sheriff’s Lifesaving Awards were given to Deputies Shae Green and Jessika Rios for stopping a would-be suicide in Santa Maria. A distraught woman had tried to hang her herself and was found unconscious and purple in color.  The deputies quickly cut the rope away from her neck and got the woman the medical and mental help she needed.

Remarkably, Deputy Rios received a second Lifesaving Award for another incident in which she helped save an elderly man who was choking. She took control of the stressful situation and began cardio-pulmonary resuscitation which saved the man’s life.

Sheriff’s Commendations were given to eleven deputies who helped save the lives of unconscious overdose patients by deploying department-issued Naloxone.  The Sheriff’s Office started our Naloxone program in 2017 and since that time the drug has been administered 19 times.  There is an opioid crisis in our country and we are pleased to have a lifesaving tool when responding to overdoses. 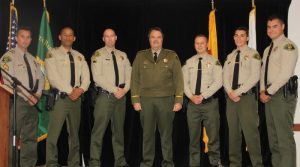 An Exceptional Civilian Award was given to Dave Welby of Santa Ynez for rescuing a suicidal woman who had climbed over the rail and was sitting on an overpass in Buellton.  He grabbed her and pulled her away to safety despite her active resistance. He continued to hold onto the woman until he could get to his cell phone and call 911. He then held onto her until help arrived.

Rusty’s Pizza delivery driver Julio Cesar Silva Rodriguez of Santa Barbara received another Exceptional Civilian Award for helping a UCSB PD officer who was engaged in an altercation with a suspect in Isla Vista. Rodriguez knocked the combative suspect down and pinned him down so he could be detained by responding officers.  His selfless actions helped prevent injury to the officer and the suspect. 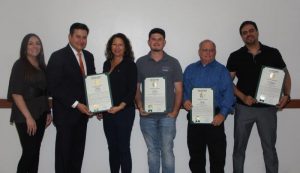 An Exceptional Civilian Award was also given to given to Alex Knightly for helping apprehend and detain a suspect in Isla Vista who had challenged people to fight and fought with a deputy. The suspect broke free from the deputy and Knightly ran after him and blocked him from entering a residence.  He also helped the deputy restrain the violent suspect until additional officers arrived on scene.

A Certificate of Merit Award was given to the proprietor of the Village Cheese and Wine Shop in Montecito, Patrick Braid, for his generosity during a difficult time.  The store was a place of refuge during Montecito’s recent disasters.  Braid opened his store which was located in the Exclusion Zone and served free sandwiches to first responders, utility repair personnel and cleanup crews. He also served free sandwiches to Montecito residents who returned after evacuation orders were lifted. 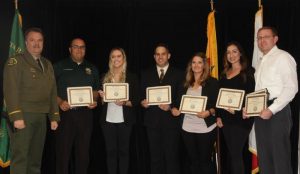 The Sheriff’s Office congratulates and thanks all of the award recipients for their exemplary service to the community.