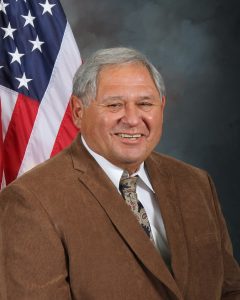 It is with great sadness and a heavy heart that we announce the passing of Chief Administrative Officer Robert “Bob” Gonzales. Bob passed away this morning, at the age of 71, due to complications following recent cardiac surgery.

Bob started his career as our agency’s first non-sworn Human Resources Manager on August 31, 2019. Just two short years later, on September 5, 2021, Bob was promoted as our first-ever Chief Administrative Officer. He remained in the position until his passing.

Sheriff Brown said “Bob loved life and his chosen profession: law enforcement.  He also loved to work, and it showed. He touched many of us with his warm smile and positive nature. He left a big impression on us, and he will be greatly missed.”

In 1972 Bob applied as a reserve police officer with the Santa Paula Police Department. He was eventually hired on with the agency as a full-time police officer. Bob held every sworn position in the agency: Police Officer, Senior Officer, Patrol Sergeant, Lieutenant, Operations Commander and, for the last 7 years of his 33-year law enforcement career, Bob served as the Santa Paula Chief of Police.

In his spare time, Bob enjoyed traveling, playing golf, and spending time with his 8 grandchildren. Bob is survived by his four adult children: Steven Gonzales, who is a Sheriff’s Deputy with our agency, and is married to Bob’s daughter-in-law, Deputy Charlene Gonzales; Michelle McMahan; Mandee Gonzales and Brian Gonzales. He also leaves behind his beloved grandchildren.