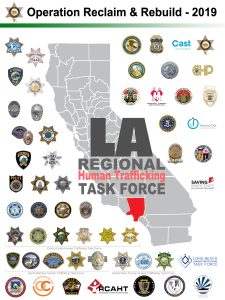 For 2019, Operation Reclaim and Rebuild took place between January 23rd and January 26th.  The combined effort was widely successful with the recovery of 34 adult and 14 minor victims, 156 males arrested for solicitation and 36 suspected traffickers and exploiters were arrested.  In total, there were 339 people arrested during the statewide operation, which is now in its fifth year.

To combat the demand side of human trafficking, “sex buyer” stings were conducted in the cities of Goleta and Santa Maria.  Undercover ads were posted on escort websites known for advertising prostitution and undercover investigators posed as the prostitute in those ads.  When contacted, the undercover investigator and the buyer negotiated sex acts in exchange for money. When the buyer arrived at the agreed upon location, they were taken into custody.  As a result of the “sex buyer” operation, 13 people were arrested and released with a citation for the alleged misdemeanor violation of 647(b) PC- Solicitation of Prostitution.

In an effort to identify traffickers and rescue their victims, investigators also conducted “sex trafficker” stings in the cities of Santa Maria and Santa Barbara.  Undercover investigators reviewed escort websites known for advertising prostitution and posed as a sex buyer when contacting the escort.  Undercover investigators negotiated a sex act in exchange for money and then made contact with the individuals who were advertising in an attempted to determine if they were being exploited.  During one sex trafficker operation, a male and female were contacted at a Santa Maria hotel.  As a result of the investigation, the male is alleged to have been acting as the female’s pimp and was booked into the county jail for the violations of 266h PC- Pimping and 266i PC- Pandering.  In a separate incident, investigators contacted four individuals at a Santa Maria hotel, one of which was found to be a juvenile female who was being trafficked.  As a result of the investigation, one of the individuals is alleged to have violated 236.1(c) PC- Human Trafficking of a Minor, 211 PC- Robbery, 266h PC- Pimping and 266i PC- Pandering.  A second individual was alleged to have violated 266i PC- Pandering.  The third individual was alleged to have violated 166 PC- Violation of Court Order.  All three individuals are also alleged to have been conducting their criminal activity for the benefit of a street gang and all three were also booked with a charge of 186.22 PC- Participation in a Street Gang.